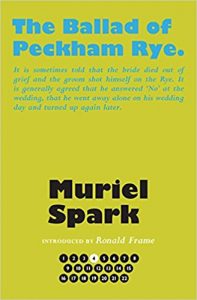 “It wouldn’t have happened if Dougal Douglas hadn’t come here.”

This February marks 100 years since the birth of Scottish author Muriel Spark. In celebration of her life and work, Birlinn will re-publish all her novels under their Polygon imprint to commemorate the occasion. The Ballad of Peckham Rye is her fourth novel, now out in this beautiful new hardback collection.

First published in 1960, the book  encapsulates in a nutshell post-war British society and working-class life. Written with a faint whiff of the ballad form and  including tinges of the supernatural, Spark takes us to Peckham on the cusp of the swinging sixties, to a textile factory where Dougal Douglas is interviewing for a position which he never intends to fulfil.

Dougal is a very charismatic young man, capable of transforming himself into whatever someone needs him to be: “Dougal sat like a monkey-puzzle tree, only moving his eyes … Dougal changed his shape and became a professor. … Dougal leaned forward and became a television interviewer.”

The character of Dougal Douglas is a polarising figure in the Peckham community. Like the writing itself, you either “get [him] or you don’t.”  Although a self-professed devil, Dougal is not an evil man, merely impish. His selfish, uninhibited and flawed nature seems to bring out similar qualities in those with whom he associates:

‘I have the powers of exorcism,’ Dougal said, ‘that’s all.’
‘What’s that?’
‘The ability to drive devils out of people.’
‘I thought you said you were a devil yourself.’
‘The two states are not incompatible …’

This bringing forth of devils is a central concern in the novel ‒  devils being of the mind, that is, not of the sort which religion conjures. In the company of Dougal people show their true colours. Those he meets are just living each day in “proper”, moral ways. Marriages go on without love, affairs without passion and lives without meaning. By living and doing as he pleases and encouraging others to do so, this agent of chaos teaches Peckham a valuable lesson: life is too short to be “living a lie”.

As discerned in the new introduction by Robert Frame, a warm companion to an otherwise cool text, Spark has written a post-modernist parable, a moral lesson written as simple fiction. Subtle social commentary seeps through the pages of The Ballad of Peckham Rye. The seemingly hum-drum lives of the Peckham citizens are used by Spark to address class, economics, religion and, through the use of the devilish Dougal, psychology.

There is tremendous pace in Spark’s writing, often leaping through hours, even days at a time on a single page. In a rather Dickensian narration, slipping through the lives and minds of Peckham natives, readers are privy to the goings on of an entire narrative world. At times the novel also unfolds like a screenplay for television, with the narration flitting from scene to scene, and with   swathes of dialogue and reported speech. At only 140 pages, it is a fleeting read with enough narrative speed to leave a reader whiplashed.