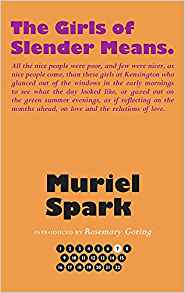 As the title suggests, poverty is the central theme of Spark’s slim seventh novel, not just financial poverty but also a poverty of mind and spirit. Set primarily between VE Day and VJ Day, the novel’s central characters are the residents of the May of Tek Club, a boarding house in Kensington –

For the Pecuniary Convenience and Social Protection of Ladies of Slender Means below the age of Thirty Years, who are obliged to reside apart from their Families in order to follow an Occupation in London.

The setting recalls Spark’s time writing propaganda for MI6 in post-war London when she lived in a boarding house for women, a time she must have remembered fondly, considering the gleeful absurdity of some of the escapades of the May of Tek girls.

The novel begins in 1963 with the discovery of the death of anarchist-turned-priest Nicholas Farringdon by gossip columnist, and former May of Tek resident, Jane Wright. His death in 1963 serves as the frame for the flashbacks to 1945 which make up the bulk of the novel. Though the events prompting the sudden, and seemingly surprising, conversion of Nicholas the Bohemian to Nicholas the Jesuit are the crux of the plot, it is the internal anxiety set in place by the early revelation of an impending tragedy that is the true driving force of the novel.

There are two types of time in the novel; the flimsy, fragmented ‘now’, and the rich and clear ‘then’. The 1963 ‘now’ time is presented in snatches of conversation with barely identified characters and locations. Dialogue is vague and often stunted, and because the tragedy of the May of Tek happened years ago, names and faces are foggy memories. Nicholas’ death, though it happened oceans away, seems to sharpen the image of ‘then’ for the characters, seems to solidify the narrative as it slips into the past.

The Girls of Slender Means is a novel that is concerned about how the ‘keep calm and carry on’ attitude of the war has bled into the cultural psyche and dehumanised the populace. Spark creates a cutting satire of a post-war society through her delightfully lyrical, yet blisteringly blunt prose –

Two men – poets by virtue of the fact that the composition of poetry was the only consistent thing they had so far done – beloved of two May of Tek girls and nobody else, sat in their corduroy trousers.

In Spark’s post-war London, the May of Tek Club is a shining centre for superficiality nestled among the jagged rubble of a bombed-out neighbourhood. Its residents, surrounded every day by a reminder of their mortality, are only concerned with social mobility, materiality, and beauty. This, Spark seems to say, is the power of indifference. A nihilistic vision perhaps, but Spark leaves room for joy, community, and hope. She may be using the May of Tek girls as an example of the degradation of moral society, but she does it with such affection.

The Girls of Slender Means recalls a distant summer of wartime shortages, when the girls bartered soap, chocolate and evenings in the one Schiaparelli dress they shared. Everything, and everyone, is claustrophobically close, but there is a very real sense of community. The girls work with, and for, each other, and the May of Tek is very much a home for all of them.

As novelist and literary editor for The Herald, Rosemary Goring remarks in the 100th anniversary edition introduction; “There is no pleasure in poverty, but those whose means are slender when they are young are often richer than most in hope.”