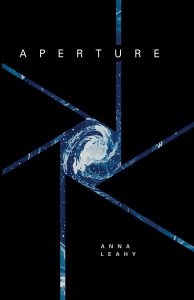 Aperture – A space through which light passes in an optical or photographic instrument, especially the variable opening by which light enters a camera.

In Aperture, Anna Leahy creates apertures through which she envisions and encapsulates – vessels through which a reader may see light. Her collection seeks to peer into the minds of women, both actual and imagined, and grant them a voice.

A story is made of characters, set in a fictional world made for those characters, and where beyond those characters there is no one. There may be a crowd, or a group, or someone unimportant, just a face, but they are nothing more than the label given to them. Who else exists in this constructed world?  What about the parents or friends of the story’s protagonist that never make it to the page? Perhaps this is what is so powerful about Leahy’s poems; in Aperture, she takes advantage of that small opening to delve deeper and search for the person off-page, the individual no one cares to look at. In “If I Had to Choose One Word”, the line “Cleave; itself and its opposite all at once” is perfectly said as Leahy cleaves open the story of The Wizard of Oz and steps inside, searching for the people important but never seen. In “The Absent Mothers of The Wizard of Oz Speak Out”, she begins at the source, Motherhood:

Leahy takes this childhood story and brings it into reality, framing the voices of narrators in the media, pushing their emotions from something off-screen into the spotlight. Leahy gives all her attention to these “absent mothers”; they come alive by her hand.

Her poems provide the explanations absent from the children’s book, the whys and hows of the central characters in the story. The Tin man was a child once, had a past, and his mother blames a harsh reality and her own untrusting nature for his heartlessness:

He was always the sort of child who played
In the rain. The world leaked in, as I’d feared.

Dorothy was left behind by her mother and abandoned by her father. It is her search for a family that takes her so far away; her mother observes,

I see no good reason why she should ever return
home.

Leahy creates these imagined interviews, drawing out secrets with her probing questions, poking holes through which to peek through. Using multiple narrators, with herself as an interviewer and the mothers as her subjects, Leahy shifts between distinct vocal inflections – both inquisitive and contemplative – to create layered poems. The occasional rhyming couplet lends something quite musical to this tonal composition. Longer lines in concise stanzas reflect monologues and hold true to the divulgence of secrets, the hidden opinions that Leahy threads throughout her collection. The female voice, which has too long been unheard or misrepresented, is finally taking centre-stage; she is given personality and a means with which to express herself.

The visual representation of the camera shutter opening as the sections progress manifests the idea of an opening mind, an opening eye now able to truly see these women and hear their confessions.

Aperture is a wonderful collection filled with intimate and eye-opening poems, written with grace and sensitivity. The subject of each poem is so wholly captured and made alive that the book rings with a chorus of female voices ‒ timid, bold, talented and true. In Aperture, Leahy’s imagination and rare ability to look beyond what is given allows for a compelling and insightful read.