‘I believe that all leaves, even grasses and mosses, acquire brighter colours just before their fall.’

The leaves are beginning to blush. Their green palms are speckled with pink and orange, colours just threatening to take over. The trees’ petals are now more the yellow of dawn than jade. Little tints of red, hint at the season to come, teasing. Grass crunches as I walk, the slightest movement sounds as though I’m treading on gravel. Green blades glisten in its wake. The air is sharp, and I shiver as it pierces my weak coat; the bench I sit on is ice.

The light is low, for it is just waking, and deep blue still lingers in the sky. Today, the dawn is subtle: a yellowish, bright-ish sort of light that trickles into the blue slowly, as though unsure of its course. Birds are waking. Their songs are louder than you’d expect from such tiny creatures. They sing from behind green curtains, on brown stages. I cannot see, but only guess upon which branch they might stand. They are rehearsing it seems, not yet ready to reveal themselves.

The indents and uneven lines in the trunk of the tree beside me are black against brown, and the light flits across them, illuminating groves never noticed. Roots seem to pull up the earth, tugging at the dirt, as if at any moment the tree might rip free from its mossy bonds and walk away. Grass curls at these roots, alive. Here the blades are longer, thicker, stronger, and I wonder if the whole lawn in front of me would be just the same, if someone didn’t cut it every chance they could. I spot a fallen leaf, hidden in one of these overgrown patches. The grass conceals it, as though hiding a blemish.

A woman jogs by. Her cheeks are as red as her short-sleeved top. And each huff releases a puff of smoke from her lips. She’s freezing. But she must have chosen her outfit knowing she would be cold. In some attempt to convince herself that Summer wasn’t over, perhaps. Her fingers, slowly purpling, know otherwise. The leaf in the tall grass is my sign of the changes just ahead. I think she’ll be jogging with a coat tomorrow.

We deny the season is here. There are still bathing suits in the shop windows. But I see the leaves that have begun to crumple and the light frost that lives only at dawn. We wear short sleeves, and thin tights, but I see us huddle from the cold, our arms crossed and our heads down. We laugh about holidays, and the grand days out we’re determined to make, but I know this is just talk, that the last BBQ has already smouldered to its ashes. We’re desperately hanging on to the heat of the sun on our cheeks and the TV adverts of exotic locals, refusing to see that little leaf in the tall grass. Why do we run from Autumn like this? Why do we fear the orange of the leaves? Why do we push so hard to extend the Summer days? What’s so wrong with Autumn? 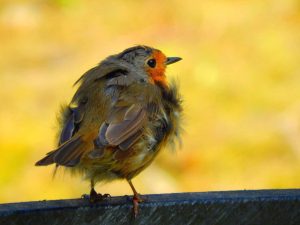 The leaves are orange now. And brown. And red. And not green. The ground is invisible. A blade or two of grass might sneak past the dried leaf barrier that’s settled, and hint of a time when the colours were different. But the paths are unseen, the exposed dirt overtaken. The whole park now feels Autumnal. Like a virus, the fallen leaves have spread far and wide, scuttling over each other to expand their reach, colonising the earth. Like a grand armada, the cooling wind, has turned each into a little sail, driving them all forward. Some leaves still cling to their branches in trees speckled with orange. I find myself craning my neck, to peer behind the foliage, to glimpse the nakedness behind. The birds are bolder now. They venture happily into my sight.

A young boy is playing in front of me, with an overgrown German shepherd. He is dressed for a drop in temperature, a hat and scarf and gloves. He seems not to feel the wind, even though his nose and cheeks have been stained red by the cold. He grabs a handful of leaves and throws them at his dog. I strain to listen but can only make out indistinct shouts from the pair. The dog might be called Toby, I think, but it could equally have been Bobby or Robby or Jack. Toby jumps high and dives into the mound of leaves the boy has created for him. I’m impressed at the boy’s commitment for the large dog is now buried in dry orange foliage. I see him smile and can hear his laughter too: the pure pleasure he gets from these dying embers of Summer. The dog too, whose tail refuses to still, is joy incarnate.

Autumn inspires a child’s wonder in me. Suddenly I see magic in the most mundane things. I pick out a leaf, one of thousands, and it is entirely new to me. I hold it to the sun and see its brown tracery like a spider’s web. And the colours reflect on my face like a stained-glass window might. This corner is red, the red of my coat. This part is purple, that maroon-y purple you might spot in the old furniture of my house. And this perfect dot is bright mustard yellow, my sister’s favourite colour.

It’s so easy, on days like this, to put my pencil against the page and write. For the park is silent, except for the laughing of people and the rustling of nature. Leaves, stirred by the breeze, are like a little chorus of applause spurring me on. The world is playful, experimenting, and the wind causes the branches to nod my way, as though the trees agree. The leaves dance about the ground, caught in little invisible tornadoes, putting on a show just for me. And so, my page fills quickly, easily, with little effort on my part, as I read it through, and look again upon my surroundings, thinking, “Have I done them justice?” I’ve spoken of the leaves whose colours are every colour, the bending branches of the trees that home the birds and beasts. And I’ve written of the child and his dog that play just over there, whose excitement in nature is something quite rare. And I’ve painted my own feelings, that adore the Autumn ways, and I’ve captured my own voice, and the things I wish to say. The world is brighter now than it’s ever been. I find myself smiling at the brand-new beauty of things I’ve already seen. 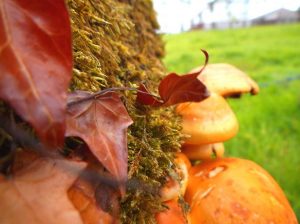 The leaves are all but gone. Decayed. All exposed, the trees look like lonely branches. Like an introvert in a crowd, little twigs shiver in the wind. The swirling leaves once made the ground their captive. But now they’ve lost their shape and structure and are soggy piles of brown. The grass may be green, but now, in the dying light, with a dark layer of frost, their jade vitality has softened to something akin to grey. The earth is not dirt, but mud ‒ thick greedy mud that seeks to coat everything that dares touch it. I can’t hear any birds, for the wind is too strong, I hear only a cold howling. I sit on my bench, where I sat a month ago, and where I sat a month before that, and everything, again, is different. It is dusk, and the sky is almost black, bar one large strip of orange that hangs low on the horizon. There is no gentle gradient between the two. It is just black, then orange. I can no longer see the sun, just the trail it has left behind. Even that is getting fainter, being steadily consumed. A sadness overwhelms me. In the sky are the last moments of Autumn when the orange disappears and the world retreats to a place with less colour. I pull my scarf to cover my mouth and nose, in some poor attempt to protect them from the encroaching Winter.

The paths in the park look like parasites now, unnatural black tendrils that weave through the grass and that shimmer with dampness occasionally in the street lights. Everything else seem a little darker. The black branches of the bare trees reach up. I see starlight stutter in the sky, little moments of light that flash at the dying sun and say goodbye. The orange is so bright, that it hurts my eyes to look at. But I dare not look away. There is a wisp of red in the sunset, a fire that burns with the life of Autumn, and it stammers under the pressure of the black. The silhouetted hills eat the light as the night forces forward.

I am alone. Everyone else left. But I will stay here until the orange has gone; I feel as though I owe Autumn this act of loyalty. When the season began, the shops were filled with flip-flops and fishing nets, as humanity denied the orange’s beginning. And now, before its end, the shops are filled with Santa hats and Christmas songs, writing off the season before it has even said goodbye. There’s a street behind me that I have felt no need to look at until now. For now, in the dark, I see the yellow squares in the building fronts, and families hidden behind, that curl up in warmth and watch TV. What traitors, that come and play among the dying leaves, and take Halloween and Bonfire night and throw away the rest. How could they turn their back on these last moments of Autumn, when the orange in the sky is choking on the night? Did it not give you joy? Did you not travel far and wide just to see the leaves? Did you not exploit this season, for everything you could? And yet I see no one else here to say farewell. No one, but me holding the hand of the decaying season.

‘I believe that all leaves, even grasses and mosses, acquire brighter colours just before their fall.’ The leaves have fallen. And the light has faded from the sky.