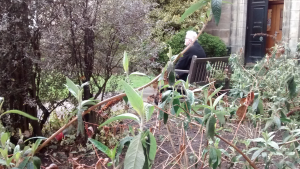 his skin is tired nose off-colour and glasses dirty

Doors are open
kids’ eyes are closed.
This day is over for them, but not for
14 drunk artists –
overlapping, disagreeing, laughing.

It will take 48 minutes
for them to start crying
and kissing each other’s hands.
A woman with plain face
brings coffee, treats
a sense of justice,
sobriety.
Her eyelids are just like the curtain:
heavy, purple and old.

It’s dark
Hundreds of books on the shelves,
written in kirilica, dusty and unread.
A yearning for education,
a fear of not knowing,
(occupation).
Two flies on the carpet
Too shy to join in, too drunk to fly.

Two people waltzing in a photograph
(They don’t look at each other)
Nothing has changed.
But this white orchid
so beautiful and weak,
competes with a newborn.
Insults a poem.

Someone’s coughing wakes the porcelain cups,
they shake and jingle
just as her gipsy soul.
This table has seen tragedy and comedy,
been used,
re-used.
dragged as a witless donkey.
And still stands at the east side of the room.

Take off your hat to no one
Come in. 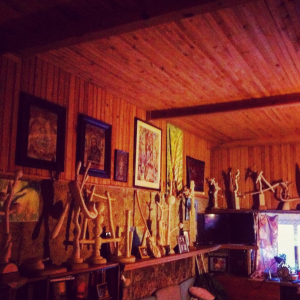 This room above my father’s workshop is my home.

The tip of my tongue dances when I pronounce home. I stand tall and proud. My heart beats. My palms get itchy. An odd feeling in the stomach. I become emotional. I think they call it longing. You can always count on home. It’s a place where there is no need for a mask. It’s yours whether you are hurt, sick or content. It holds you within its walls, puts the outside world to silence and makes your breathing slow and sweet.

My home has been a little bit crowded. Not to have your own space as a teenager was pretty frustrating, but at least I never faced issues as a scratched poster on the wall or a broken CD player because we simply did not have those things. Yet, there have been times when I hated this. Times when I wanted to invite my friends around or talk silly little things on the phone without my sister learning the alphabet three steps away. I wanted to leave so desperately that when my sister got married and moved out, I locked myself in the circle of envy and tears. Oh how lucky she was to escape I thought.

Not long after that, I escaped too. I saw my mother crying while watering an orchid. My sister was eating an orange (I still vividly remember its smell). Father was welding in the back yard. As always. I longed to find a new home. But…

Now I want to hear her steps in the kitchen, hear him turning the pages of newspaper. I don’t want to ask again why we iron napkins or who took my slippers. I want to look closely when he shows me how to fix my shoes. I want my home back.

I come back now as a grown-up who has opinions and ambitions, but doesn’t have time. There are many returns home, but I don’t sleep beside my sisters, lying awake in the middle of the night, imagining we were witches and trying not to laugh. They phoned me up last week to say that dad stopped subscribing to newspapers.

It’s not the same, they said.
I smile. Close my eyes. Open my doors. I smell an orange.

Somewhere far, really far away I hear my father welding. 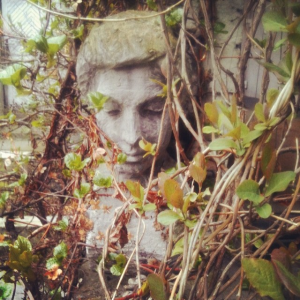 (I have nothing more to grasp. For not listening to your song, forgive me.)

I heard that she left the country two y(t)ears ago. She sent me a post card, but I changed my address three times before it arrived. She tried to call me, but I couldn’t hear a word she said and I don’t know what to blame. Connection or the sound of my fear. That same night I had a dream of her questioning me if she smelt of a fool. My lover woke me up and asked me why I was crying. I told him I was laughing.

I knew a woman who used to sing me to sleep. She said that finding a right sentence can exhaust a mind, but never narrow it. She said that God is a woman. She spoke every word as if it was her mother’s name. She called her song ‘my silence’. She told me to find a man who would whisper numbers into my ear as if they were a poem or a melody; numbers of planets, distances between continents, lengths of the oceans.

(I have nothing more to grasp. For not listening to your song, forgive me.)

Changing continents must have left a scar on her tongue. I imagine her sitting on the edge of Europe, murmuring her prayers when somebody asks if it’s drizzling. The railway line ends with the confetti of tourist brochures. She stands up, clears her throat and quotes Morawski: ‘after you’ve burned all your maps the legend remains’.

But nobody listens. The world around her is purely the godless, full of shallow relationships, slow digestion, technology and miscommunication. They put their headphones on and walk away. She is not in charge of the game anymore. She cannot win.