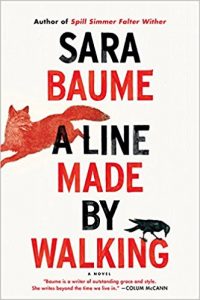 Sara Baume’s second novel, A Line Made by Walking, was shortlisted for the Goldsmiths Prize in 2017. The nomination acknowledges its distinctiveness, for this prize celebrates writing which extends the boundaries of the novel form. Following on from her highly acclaimed debut, Spill, Simmer, Falter, Wither, which won the Geoffrey Faber Memorial Prize and was shortlisted for the Costa First Novel Award, Baume’s star is clearly on the rise.

A Line Made by Walking might have its quirks – it includes black and white photographs of dead animals and many references to works of art – but it is not experimental in a way that alienates the reader. Its structure feels like a collage, a landscape of memory and poignant self-awareness, but the pieces fit together so well that it’s never obscure or difficult to read.

The novel tells the story of Frankie, a chronically depressed art graduate who quits her job in a Dublin art gallery and goes home to live with her parents, somewhere in the rural backwaters of Lisduff. Frankie loves her parents but “faced with an undetermined length of stay and no independence to return to, my sadness lengthened, my temper shortened.” When the doctor offers her antidepressants, she rebels. Convinced that solitude and not medication will help, she persuades her parents to let her move into her grandmother’s cottage which has lain empty for three years.  Frankie pours out her thoughts, memories and feelings as she applies herself to the business of rehabilitation. She cries a lot. She tries hard to find routines “because structure and maintenance and pattern, and broccoli are what sanity consists of.” She reflects on her childhood and her family, and she reflects on the gap between her artistic ambition and what she has actually achieved.

Death is a preoccupation – the death of her grandmother, the death of various pets, the probable death of the passengers on a missing aeroplane. To add structure to her days, she sets herself an art project – photographing found dead animals – because their death mirrors the death she feels inside. It’s not all as macabre as it sounds, in fact, Frankie’s observations and opinions on subjects like religion, late night talk shows and hairdressers are frequently humorous. She moves through anecdotes in rapid succession, but Baume’s writing is fastidious. The smallest references are revisited and rounded off with admirable precision.

For the reader whose knowledge of art is meagre, Frankie’s compulsion to test herself about art works is joyfully enlightening. “Why must I test myself? Because no one else will, not any more. Now that I am no longer a student of any kind, I must take responsibility for the furniture inside my head.” Helpfully, the art references appear in a list at the end of the book so that inquisitive readers can view the art works for themselves and draw their own conclusions.  The reshuffling of all that furniture in her head finally leads Frankie to the revelation that she’s set her bar too high: “It’s time to accept that I am average, and to stop making this acceptance of my averageness into a bereavement.”

A Line Made by Walking is a truthful book, reflecting some of Sara Baume’s personal experiences: she studied art and fell into depression in her mid-twenties, refusing to take the anti-depressants she was prescribed. However, Frankie could reflect many artists, and indeed writers, who are never quite satisfied with their work. The well-chosen J. D. Salinger quote on the flyleaf (from De Daumier-Smith’s Blue Period) summarises perfectly the eternal struggle of the artist: “The worst that being an artist could do to you would be that it would
make you slightly unhappy, constantly.”

With the aforementioned Goldsmiths nomination last year, it’s to be hoped that the scales will continue to tip in the direction of happiness for Sara Baume.