language – mass noun
1. The method of human communication, either spoken or written, consisting of the use of words in a structured and conventional way.
2. A system of communication used by a particular country or community.
3. The style of a piece of writing or speech.

The version of me that exists in my own head is eloquent. My head is a world filled with ideas and concepts. I can colour the sky with words and build skyscrapers with bricks of thought. I add new cities, all filled with recently learned languages. Everything moves along, everything connects. In my head my thoughts are coherent and clear, my words expressive.
Then I open my mouth. In a flash, an earthquake begins to erupt. Everything comes tumbling down. There is nothing here but fallen debris. I put pen to paper and nothing comes out, hours upon hours of emptiness.

What is language?
Languages are alive. Words are loaded.

Language is a communication system, a representational system. It provides us with the tools we need in order to create a form of ourselves – our identity – for others and for ourselves. Language is what allows us to share our ideas and our sense of self. It flavours the very way we experience our lives.

Words are frenzied and hot. Beating, soaring, crashing.
They are love, communication, expression, happiness. They tell of the desperation, the loneliness, the grief and loss. They are reconciliations, the shared connections. They alone have the power to move universes.

Regulation, rules, a complex system of sounds and movements. Scripts, structure, sentences and syntax.  A language is something anyone might create and anyone can use. Language is a concept, an art form, a map of people and where they’ve been. Where they are going.

I was introduced to French when I was 7 years old. There was a French lady who lived only a few streets away from our own house, she had tanned skin, laughter lines and colourful flowers in hanging baskets outside her front door. She was only ever known to me as “Madame.” I decided that the word that suited her best was mysterious. “Bonjour Kathareau!” She greeted me as I joined the other children around her large oak dining table. The words we learned were not just words but they were interesting words, words I couldn’t find in my books at home. Words with too many vowels and with squiggles above the letters. Madame taught me to speak from behind my nose and recite numbers about cats sinking at seas; my bright red folder was soon filled with these new phrases that I’d squirreled away. We made crepes on Pancake Day. Drizzled with lemon juice, smothered in icing sugar. Then, I had to leave and go back to the real world. “Adieu Kathareau. I will miss you.”
It wasn’t until I entered high school that I began to hear those familiar words again.
Un stylo, une pomme, l’ordinateur.  This teacher had a permanent scowl. He was not French.
He only taught us what would be in tests. It was not language we were learning but an exercise in memory and patience.  I decided that English should be enough for me. “This is so stupid. Everyone speaks English anyway”, a girl with a high blonde ponytail said loudly beside me while smacking on chewing gum. But still….I needed the option to say things differently, to live differently. “It is hard to feel in an adopted language, yet it is impossible in my native language.”[1] 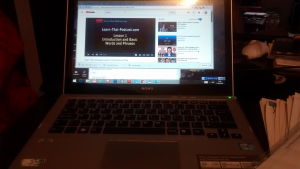 There are words in other languages; concepts, feelings and ways of being that do not exist in my native tongue. These words that by virtue of being created are giving permission to simply be.  There are things that are untranslatable.

“What is your favourite word in Thai then?” I hit the enter key and the word ‘sent’ appears as a purple bubble on my screen.  I soon receive the dancing dots that mean May is typing a reply. May is from Bangkok, Thailand. We have been helping each other online to learn the other’s language online for just over two months.

The first time I saw Thai written down, I thought it looked beautiful, so intricate and yet so bold, a series of lines with circles, flicks and accents. A language that resembles melody.
I instantly wanted to learn it.

However, Thai has one of the most complex scripts in the world. I have spent these two months learning the alphabet and not much else. May explains some letters as different animals. My favourite is the one that looks like a chicken.  I rattle on about the chickens and buffalo until she asks me about present continuous tense and prepositional verbs.

My phone buzzes.
“My favourite Thai word is เข้าใจ. (Khao Jai)”
“What does it mean?” I message back quickly, excited to have another word in my lexicon.
“It means like…I understand.”

“Why is that your favourite?”

She explained to me that “Khao” means to enter into somewhere and that “Jai” means heart. So by understanding something, it is entering your heart. – Your heart, your mind, your spirit.

My world seems to shake at that moment. Foundations threaten to collapse.  Why is this word being translated as simply just ‘understand’ ? Do people who speak Thai fluently feel that everything they understand is locked away in their hearts?

There are words that are untranslatable – words you have to find yourself. To understand (etym: understandan: “between, among”) literally ‘to stand in the midst of.’  To stand alongside, between, among people, ideas, language.

To truly understand something we should put ourselves between and amongst the words. And now, understand khao jai.

My younger brother has autism and has never spoken a word. He has his own kind of language. Other people just might not see it. I had once hoped and begged that he would one day be able to say a few somethings, anything, to me. When I was young, when I thought that everything had to be said. Now I know that some of the most important things are not spoken.

I am certain my brother thinks in fully fledged colour; in colours that I will never be able to see. He thinks in feelings and in sounds, synapses firing.

We sit on the sofa watching Toy Story while eating mini-pretzels.  I’m mid bite when I catch him glimpsing me. The eye contact is rare. I raise my eyebrows questioningly, and he laughs. Just… really laughs. He throws his head back and his eyes squeeze shut tightly. His joy makes my heart leap and before I know it, we’re both in hysterics and the pretzels are sprawled all over the floor. This moment of just me and him, complete peacefulness and happiness  ̶  the feeling of being transported to a time when we were both much younger. We can both feel it.

Laughter is a language too.

My Dad and I are sorting through the battered boxes that crowd in the dark corners of the attic.

Inside the boxes are black and white photos, a complete china tea set, folded up duffle coats that make the air thick with dust. It swirls through the air and settles softly on wooden beams. These fading objects have not seen daylight for longer, presumably, than I have been alive. The next box I peer into is full of various types of documents. Certificates, papers and a small bundle of letters tied together with a piece of brown string.

They are quite clearly the oldest thing in the room. Each piece of parchment has turned a faded yellow with deep creases running across where they had remained tightly folded for decades. Each letter is written entirely in a small, lapping cursive.

“They’re written in Gaelic” My dad says over my shoulder. “I think they are letters home from my Granda, during the war. I found them when I was younger.” “And can you read it?” I ask him, trying to gauge his expression. “Only a few of the words.” He says as he takes the letters into his hands and scans the paper. A sigh.  The language is probably even more foreign to him now. “It’s a shame.” He says simply as he bundles the letters together and ties back up the string. I feel guilty.

If language is cultural heritage, then why is it that this language, the language that my great-grandparents spoke in, is more alien to me than French? Why had none of it passed on to me? Why had it died somewhere along the way?

Shouldn’t I be learning this language instead of the French, Thai, and Korean.  Mandarin, Swedish and Spanish? All of the languages I’ve studied for a few weeks at a time, these countries I’ve never even stepped foot in. Yet I know more of their languages than the one important one from the country I have spent my life in. I hadn’t even thought to learn it.

“Like all intimacies, the intimacy between one and one’s mother tongue can be comforting and irreplaceable, yet it can also demand more than what one is willing to give, or more than one is capable of giving.”[2]

The language I use when I write in English is too vague, not intelligent enough, too abstract or too concrete. Overly cinematic. I love telling stories but the process of writing them down is so incredibly painful.

So I hesitate to write. The fear of it being imperfect, the anxiety of misinterpretation, the dread of making contact with my brain – those thoughts and feelings that won’t come out on their own. It overwhelms me. Instead of words flowing flawlessly and eloquently, they stumble and trip.

My thoughts come out in disguised fragments, in shattered parts that I have to tirelessly uncover and stitch together.

I collect the pretty words like shells. The pearly, opalescent and sparkling words that seem to whisper things about existence that I hadn’t already known. I try to use those shining words to write about myself and my entire being starts screaming “No!” I want to lapse back into the distancing ‘we.’  That voice of universal experience that I am so good at. I can talk about humans for hours.

I don’t really want to talk about myself.

But English forces you to do just that. Sentences start with an “I”. A central me in every story. A clear identity. You have to give away your position. What comes out of my mouth is not the voiceless language that appears in my head.

Instead a distorted version of hybrid English with Scots comes out.  Strong Glaswegian tinted with soft Irish. A voice that carries the weight of all the other external sounds I’ve forced it to use, however temporarily.

I hide myself from language inside of language. I strengthen the language synesthesia and ignore the self I become when I open my mouth or write.

I hide myself in words.

Language is not thought, but rather language disguises thought. It is not the language I am afraid of, but myself.

When I speak a different language, I have greater control over the person I am within it. I am the cautious learner. Or I am someone who only knows how to say animal names.

When I speak English, thoughts may begin to tumble out and I’ll have no way of stopping it.

I didn’t want to write, or even speak. But I cannot keep hiding.

I have to face myself in writing.

English has shaped me into the person I am. It is the language of my childhood, communication with family, friends.

It is the language of me.

And I’m not going to be scared of my voice anymore.