Digital Interaction Design embraces one of the smallest groups of students in this year’s Final Year Degree Show, but their work is sure to exert an enormous impact on the design world of the future.  The atmosphere on entering the building and meeting up with the helpful and professional Joanna Helfer of the Art and Design Office was celebratory, with many students opening their degree award letters outside in the late spring sunshine. Within the gallery space, I, too, found much to celebrate. Two of the final year students were on hand to enlighten me about their work. 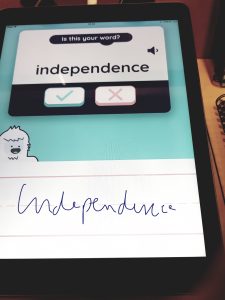 James Panton – his App can even recognise my terrible handwriting!

I firstly spoke with James Panton, who has designed an App and Web platform to assist dyslexic Primary School children with spelling in a new and engaging manner. James explained that he had undertaken a project in his third year, which examined inclusive technology, and this had sparked his interest in taking his initial experience with the subject further. Interactive spelling was an area where he sensed more could be done to assist children who needed more support, and the outcome was this final year project.

I found the format clear and easy to understand, the design colours calming and the characters which James had created to make the learning more of a fun experience engaging and filled with personality. He has clearly spent a considerable amount of time refining his digital content to the stage it is now at, including test and feedback sessions with a local Scout troop and integrating open source software for the handwriting recognition part of the tech. There is also a teacher dashboard included in the product, which allows educators to identify the particular phonics which an individual child has more difficulty in spelling. James hopes, that with a little more work, this software could become available in schools in the not-too-distant future. 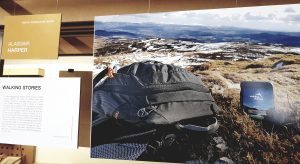 Alasdair Harper has designed an App for hikers and hillwalkers, and he explained that it collates the user experience in the hills and countryside into one or multiple time-scaped story or stories. Photos can be added and tagged, and other information such as the type of weather, name of the walk or climb, fauna and flora encountered and comments on different part of the journey can also be integrated. Alasdair has been a skier since childhood, but the hillwalking and hiking experience was less familiar to him, and he told me that he spent a lot of time learning more about this world before he felt confident enough to be able to proceed with the development of “Walking Stories”. The design is sleek, whilst still having that beautiful rural feel about it.

I wandered round the rest of the DI Design projects at my leisure and was hugely impressed by the scope and variety of what the students had focused their talent on over the past year. From Agathe Delcourt’s very specific App to collect data during Handball games, to Mack Millar’s more widely applicable interactive App which smooths the transition between human and digital interaction, especially in the challenging adaptation from school pupil to university student the ideas and dedication to them by all the students was remarkable. 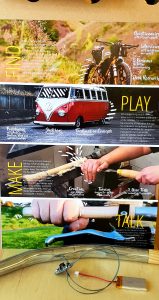 Nathalie Mini has created “Berg Geist” a set of interactive handlebars which in her words “renews the fascination of exploring the surroundings on your bike”. Connor Finlayson’s project is a digital experience which retains an analog feel and look to convey the story and character of a Holocaust survivor, Zigi Shipper, with whom he spent time over an extended period, learning more about his life.  Tiernan Haugh, Luke Holland, Alice Horton, Neil Lavin, William McIntosh, Leonardo Petrucci and Thomas Sanches have also produced admirable and imaginative work for this exhilarating Design Show. Digital Interaction Design is a group which forms a convex meniscus of talent, seething with ideas, inspiration and some truly remarkable achievements. The future of DI Design in Scotland and beyond is assured amidst such sharp minds and passionate souls.