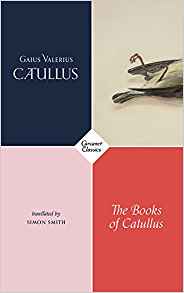 The great Gaius Valerius Catullus lived, loved and died in northern Italy around the time of Julius Caesar and Cicero. Not much is known about him other than what can be gleaned from his poems, for example, that he had a great fondness of kissing:

Give me a thousand kisses, then one hundred,
then a thousand, then a second hundred more,
a thousand without a break, and a hundred –
then, when we’ve totalled up thousands on thousands,
we’ll throw them in the air to lose the knowledge,
so no bad person can control us with knowing
the grand equation of the sum of our kisses.

So much has been said about Catullus, his life, his poetry and his influence on English love poetry by scholars (a list of some of the most thought-provoking reads is helpfully provided at the end of the introduction) that there is not much to be added. I will focus my thoughts on what makes this version of Catullus poetry special: the translation. Simon Smith has pledged allegiance to the authenticity of the experience by translating turns of phrases and expressions into modern language. His translation unlocks another world: it gives us an ‘in, a way to begin understanding, a first impression of how a Roman might have had read these verses around two thousand years ago. I am usually not a fan of updating and modernising language but, by some unfathomable alchemy of translation, Smith manages to keep the balance between being timeless and being modern, so that these poems come to life, seem immediately relevant without becoming tied to present fashions:

Flavius, if your sweetheart were not lacking
Charm and coarse, you’d want to tell Catullus all
About it, and you wouldn’t be able to stop.
The thing is you’ve fallen for some common bitch
Sickly to look at, but you just won’t own up.

Yet the translator is well aware of the risks involved in modernising, in losing sight of the historical distance and the resulting differences. In his introduction, he states that for “the modern-day reader approaching the poem (No.8) anew, unfamiliar with its cultural nuances there is a risk […] (the reader) is lured into an act of cultural appropriation, eliding the poem’s historical reality.” And it is the case that one can easily read Smith’s translations, feel the familiarity of the words yet still perceive the historical distance. Would you have thought to write funny verses about your friend’s amorous adventures?

So spill the beans, for the better or for worse
I want to celebrate you and your lover
to heaven with the force of my funny verse.

Smith has grouped the poems into three books: the “polimetrics” (Nos.1 – 60); the long poems on marriage (Nos. 61 – 64); and the elegies and epigrams (Nos. 65 – 116). What has been said about the translations so far mainly applies to the first book, which is most free and liberal in its approach. But the more traditional translation of the later books feels much more natural to the reader, after having been eased in by the early more accessible verses. It is as if the translator, in a very pedagogical manner, has captured our modern attention with familiar and slightly jarring words and turns of phrases, lured us into reading and accepting other, more old-fashioned lines, and thus has slowly been immersing us in a world of quite unfamiliar words and terms and expressions.

When he then moves on to the more literal translations of Book II and Book III, the transition is easy and the modern words, the salacious turns of phrases (try reading No. 16), the familiar expressions are not even missed.