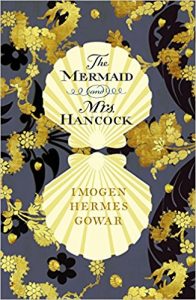 Imogen Hermes Gower’s debut novel, The Mermaid and Mrs Hancock, is a beautifully written slice of Georgian life that depicts the fortunes of a widower merchant, an ambitious courtesan, and a mermaid. Gower’s London is intricate and robust; she uses her background in archaeology and anthropology to breathe life into the city through the smallest of period details. Her characters are well-rounded, feminist-leaning and beautifully wrought. The cast of women includes the ostentatious and shrewd madam Mrs Chappell; “haughty whore of the first water”, S Angelica Neal; Mr Hancock’s sharp-minded and sharper tongued sister Mrs Lippard and her blisteringly bright daughter Sukie; and, of course, the vivacious girls of the nunnery. As Mr Hancock says: “These women are complex in their loveliness.”

There are two mermaids in the novel; the first is a shrivelled little horror that seems to be a nod to the Fiji mermaid: a baby monkey’s torso stitched to a fishtail so expertly that no-one can detect the forgery. The second is a creature of the sea – a swirling, ethereal presence that glistens in the water like rippling sunlight on waves. She is “so vast and glinting” that she is initially mistaken for a school of herring. And once she is hauled aboard, they discover that not only does her body fill every molecule of the water in which she is held, but her presence spreads wide, filling the ship with a pall that plunges the sailors into a deep depression. The sailors have imprisoned an empath and her power is far reaching and her pain intense. When she reaches land, her miasma of despair creeps from ship to shore to storeroom and brings a darkness to the lives of the central characters and the text.

The novel is divided into three books and the tonal shift between books one and two, and book three is significant. Where the tale of the Hancocks had previously been a slightly dazzled frolic, in book three the intensity is ramped up to horror proportions. The arrival of the eponymous mermaid changes the stakes dramatically: characters’ internal lives are suddenly filled with paranoia and deeply depressive thoughts. Mr Hancock is paralysed by the pervading despair, Angelica crumbles under the weight of her own expectations, but it is poor Sukie who is haunted by the call of the caged creature. It seems that the beautiful mermaid is the true horror of the two. This was my favourite section – Gower deftly handles the building anxiety and really keeps you guessing as to her characters’ fate. Having said that, the sudden dollop of magical realism and the emotional shift don’t quite work for me. Perhaps if Gower had built a less visceral Georgian London I’d be more inclined to accept the appearance of a mythical creature. And maybe if difficult scenes had been handled with a slightly less cavalier tone then book three would feel less like reading a completely different novel.

The Mermaid and Mrs Hancock has a relatively uncomplicated plot that is spun out in a web of character relationships, expectations and desires. I can’t help but feel that Gower has written two books and knitted them together not unlike the stuffed wizened mermaid, only the stitches are all too visible and the abrupt ending does justice to neither. Overall, I found that The Mermaid and Mrs Hancock a little too like the fancy sweets Angelica favours, intricate and pretty, but with very little nourishment.