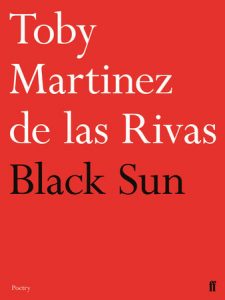 When readers omit a poem’s title, I’m perturbed. Poets fret over titles. Not just their wording. Should it hold to the left, be centred? Capitalisation? If there is superscription, are italics necessary? Are endnotes too hidden? Are footnotes overly close and distracting? Don’t even consider line-ending notes…

This march divides background and essence. What enhances and what may kill a poem’s reading is fraught. Toby Martinez de las Rivas occupies that difficult territory throughout Black Sun in poems that are not merely typographically challenging, casting down the gauntlet immediately with his verse’s cartography as it were.

There are three opening quotations (divided by the contents’ page) before the poems, and his image of the titular sun, circled by italicised poems, is strategically-placed throughout. Ostensibly, that first poem is in traditional two quatrains. However, it is untitled, with an italicised dedication (in a smaller point size) halfway down the right-hand side. All through the collection, these non-titles appear there, which asks us to read in unsettling ways. Those italicised fragments grow. Initially, I found them suggestive of those interesting scribes’ notes on Medieval manuscripts, and wondered if Faber’s unquestionably excellent aesthetic might hinder here, and if more experimental typesetting might have aided the poet. Ultimately, I believe it works.

Two major sonnet sequences follow, all formal poems, but each mapped with this strangeness. De las Rivas is not reliant on formatting challenges to confront and perplex, his theological conundrum subject-matter being inherently difficult. We should not fear difficulty in poetry, but I suspect few will close-read this collection satisfyingly without first burrowing into the poet’s biography, ethics, politics and some Spanish history. Not all will make comfortable reading, but these poems are unlikely to give themselves unsupported. Black Sun explores what is in the poet’s own mind the impossible: that paradoxical area of light in darkness, death in life, that which is “simultaneously sinful and graceful”.

Happily termed a “religious poet”, de las Rivas draws on his Anglo-Catholic childhood. By the second poem, readers not yet alive to his running G. M. Hopkins’ influences will be tripped by his use of diacriticals and ampersands in “of her stoop & strike, her failure, her re-/ lofting”. Resident in Spain, with dual homeland pulls, elsewhere he makes similar use of specifically Spanish punctuation. The textspeak “yr” is also frequent, although no other such contractions occur. For some this may suggest signalling, utterly unlike, in this case, Hopkins’ very real sprung rhythm.

Typography and religion apart, these are reference-dense poems, nodding not only to the poet-revolutionary Jesuit, but to Blake, Plath, the Bible (K.J.V.) and more, with frequent intertextual and ekphrastic allusions. There is no shame in a poet asking much of readers, but most poems here have a single word which seems out of register, odd or requiring checking. You may well recognise meadow-rue as “thalictrum”, be familiar with the obsolete “bobaunce” but maybe in the poetic “swathe through clouds of Diptera”, you might yearn for “house-flies”.

There are wonderful lines: “egret with legs trailing like anchor ropes” and “the flowers exhale beneath the threshold of/ hearing, constellate their little season” where the sound qualities, the bookending craft on alternate lines, the clarity of imagery escapes form’s bounds and every poem’s heavy freighting. I would have appreciated more of that.

His self-categorisation gives problems; these poems possibly lack the sincerity Hopkins’ self-emptying kenosis, known differently in Plath. Nor is poetic formality the real barrier; Michael Symmons Roberts proves that in his own religious poems. So much is set in Moorish Spain, yet, in exploring paradoxes, curiously, de las Rivas’ references are entirely Christian. There are joys here, but a certain (for me) reverential self-referencing in that religious context (such as mirroring of his own relationship breakdown with “a slow crucifixion”) proved dissonant. I found the poet’s need to assert his intellect rather intrusive, but I hope that many will read this second collection very differently.