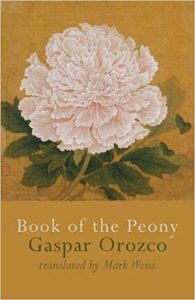 In a remarkable extension of thought, The Book of the Peony buds, expands and lets fall astounding petals: prose poems and haiku invoking an infinite, unattainable peony. The peony is allegorical. It is approached with the mind. It is the illusory peony of separation, of birth and death. Or, it is the shimmering unity beyond the illusion. These poems come from a deep resource of dream-like wisdom, vertically-preserved through generations. What apprenticeship has given Gaspar Orozco access to such a rare, authentic enlightenment?

Orozco originates from Chilhuahua in Mexico and, as a career diplomat, is currently based in San Diego. He was a member a Mexican punk band, Revolución X in the 1990s and has co-directed a documentary film: Subterraneans – Mexican Norteña Music in New York.  The Book of the Peony is his seventh poetry publication, translated from the Spanish by Mark Weiss. The original Spanish of Memorial de la Peonía is also reproduced in this Shearsman Edition and a comparison validates the translation as clear and accurate in tone and substance. The writing is conversational but slightly formal, almost didactic at times, but never preachy. The poems would surely sound beautiful spoken in their original Spanish.

The poems are numbered, rather than titled, and the collection is split into two parts – the first involves expansion: “Then the brightness comes forth, the unimaginable energy breaks free.” (1:6). In the second part, the peony and the poems are darker: “In the petal, unfolded and strong, he could see its fall, and in its fall his own disintegration.” (2:11).

The peony is a weighty traditional symbol in Chinese and Japanese culture and several of Orozco’s poems are meditative anecdotes of its depiction by poets and artists over centuries. From the inspiration of a contemporary artist:

Cai Guoqiang begins to think the flower. Five cardinal points, the mind a blank. The artist knows that the peony’s road opens, and multiplies, and is lost in unforeseen ways…Immortality begins in the eye (1:16)

Also appreciating the road of the peony, and some ten centuries earlier, a Chinese statesman and poet, Ou Yangxiu, mentions a costly species of peony which has more than 700 petals,

But it was also the name that he gave to a class of dreams, in which beings and places are seen once and never return. A dream, it is written, that changes forever the lives of those who receive it. (1:7)

Indeed all of Orozco’s poems in this collection carry the sense of visionary revelations that cannot quite be grasped or expressed in language. As a poet he displays the confidence to step back and let details take care of themselves:

The first page of the book of the peony is lost. Something about mirrors and snow and roads found after long travel. Something about slow architectures, fires that leave the walls standing but the interiors ashes. (1:1)

Orozco’s haiku, which intersperse the prose poems, operate with an ease of accomplishment – he demonstrates a lightness of touch and a swift deftness in the turns as he obeys the rules of the form. South America and Eastern sensibilities meet in these poems, as the touchstone of peony alludes to both abundance and impermanence – cities, civilisations, revolutions rise and fall. The dark reflection of the flower is more enduring than our ‘reality’. Orozco offers the device of the peony as a map for those who journey “touched by a thirst for clarity and a yearning for oblivion…”(2:12). The Book of the Peony would be my choice of desert island reading material; as true poetry, it both creates and dissolves worlds beyond our worlds.