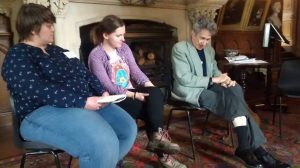 (from left) Paula Lyttle, Zoe Cassells & Lorens Holm as respondents to the Day One discussions

When I was informed that our very first essay conference was to take place two days before my graduation, I’ll admit I was dubious. Such anticipation, such enthusiasm, would surely exhaust itself and leave me slogging on stage with about as much energy as an old sloth, overwhelmed with ideas, questions and a sense of that stubborn ‘future’ weighing upon me. And yet it was the essay, in all its varying definitions, bouncing around in the minds of the delegates and the guests and across the walls of Hospitalfield House, that kept me going.

The venue alone deserves its own review. Originally built as a hospital in the 13th century to support Arbroath’s Benedictine Abbey, Hospitalfield House was eventually remodelled by the Allan Frasers’ as a hub of cultural and artistic inspiration – and remains so to this day. We begin in the picture gallery, surrounded by 19th century oil paintings and the kind of time-stained furnishings that feel otherworldly, that make even the oldest among us feel very, very young. It was with youthful optimism that we welcomed the academic celebrity among us, Philip Lopate.  Lopate’s keynote provided us with an introduction to the history of the essay, while his maverick humour set us laughing off any of our remaining cobwebs, so that we were ready to take our ideas ‘for a walk’ so to speak.

From the outset, it became clear that we needn’t “walk” alone; the delegates among us (I hesitate to use the word ‘guide’ here, as I’m sure they’d concur) embarked on this journey with us, having either written essays or written about essays. Kirsty Gunn heralded in the discussion by suggesting that the essay be precisely “thinking on the page”, a phrase which received a number of nods and smiles. Linking the essay with thinking proved to be one of the most important concepts to come out of the conference, persistently cropping up either in discussions on writing, reading or educating. Despite its simplicity, this is a link that many fail to make, and a link that Gail Low and Kirsty Gunn fervently attempt to reconnect in both the conference and the classroom.

Still, it can often place a somewhat academic slant on the essay – and for those who perhaps wish to essay away from thinking to something more palpable, physical or emotional, there’s the artists. Emma Boland provided a shift from Montaigne and Proust with her real-time essay read from an iPad, as anecdotal as it was profound. I was particularly struck by the way she centred it in her personality, in her experience, something many essays either intentionally or unintentionally avoid. This dynamic spirit was precisely what the conference tried to achieve: an academia simultaneously toned down and blazingly confrontational, an active essay. Graham Domke, curator and all-round creative, talked of the influence of essays on his work with artists, and seconded Boland on the visual-written element in contemporary essays. To evidence such concepts, DJCAD’s very own Tracy Mackenna presented her film essay, a study of walking, essaying and home, while Domke’s “Reading Rooms”, an exhibition of posters and art work around the house showcase various 21st Century art that seem strangely at home with its 19th century counterparts. The essay theme seemed to bridge the two.

The publishing panel grounded the ideas we had walked with in the morning, as though stopping to pause and reflect on the status of the journey. It quickly became apparent that the word “essay” is a bit of a dirty word in the publishing world, much murkier than poetry or nonfiction. It is this same fear of the essay that has writers not only covering up the word with another term, but actually – and sadly – choosing not to submit to even the most unintimidating and open literary magazines, like Kenny Taylor’s Northwords Now. It followed the progression I’d expected, including a discussion of the impact of online publishing and some hazardously cynical remarks on the role of taught creative writing. I was by no means in the minority however; Mackenna rightly brought interdisciplinary education to the forefront, exclaiming that it is exactly our ability to experiment and cross disciplines that informs the essay and fuels creative engagement.

Reflecting on the conference as a whole, I am inspired by all that it achieved (even if what it achieved is obscured by its essayistic open-endedness). It brought artist and academic, creative and critic together. For all its complexities, each delegate stepped in to offer up their own confusion, their own process. Above all, it was this.  It was Chris Arthur saying, so unassumingly, that he simply wrote essays and that he doesn’t always have control. It was Elizabeth Reeder and Gabriel Josipovici’s emotional performances. It was walking without a destination in mind, as an essay does, that lead me onto that stage invigorated and ready to take my own ideas for a walk.

On the morning of second day of the conference, the “Teaching Essays” panel began with Peter MacDonald’s encouragement to fail. Failure, he said, teaches us how to think; to think of, to think around and to think through an idea. His tutorials at Oxford are a testing ground for his students’ thoughts and he gifts them failure without repercussion. Tutorial time is about them, “about working through their ideas” and not his. His program of creative failure is designed to combat the systems of checklists and template essays now so much part of the Curriculum for Excellence.

It was unsurprising then, that attention turned to the high school students in attendance and their thoughts on teaching. One student spoke of the schematic essays they had to write in order to hit specific understanding, analysis and knowledge targets. Another, in response to a question from Kirsty Gunn, spoke of the rigid separation of academic and creative writing. Achieving the balance between fostering individuality and ensuring students can meet marking guidelines is certainly difficult, and an issue that Mary Bovill, who teaches teachers to teach, is all too aware of. She regularly comes up against legacy of the “climate of accountability” in her own seminars, not only in the attitudes of her students but in the schools where they will teach. Mary’s teaching encourages the presence of the “I” in her students’ essays. She hopes, that by removing the screen of the academic “we” (or “one”), students might learn to be more present in their work, more invested and willing to risk. And that as teachers they might teach their own students to better inhabit their writing. Having just graduated, I can’t help but think about my own tutorials. The only space I ever felt freedom to fail, the space to be brave, was in Creative Writing.

Once the panel concluded, we were joined by several more schools and students for writing workshops. I realised during the panel, that if a room full of essayists and critics couldn’t pin down the squirming form of the essay, then teens straightjacketed by the education system would probably struggle. Instead of the mimicry of form I had intended, we literally took our ideas for a walk in the gardens. Observation and being present was our focus. When it came to sit down and write, I cheated a little and gave them a formula for essay writing; I told them every assumption should be questioned, that they should be exploring what they know and how they know it, and be doing it on the page.