The MFA in Arts and Humanities is an interdisciplinary degree that gives students an opportunity to combine their studio practice with a wide range of humanities subjects, such as English, Culture and Society, Philosophy, Film Studies and Gender Studies. The synthesis of ideas has resulted in a breathtaking show.  It’s quite a challenge to hike through the Crawford Building to find the exhibits, but it’s well worth the effort. 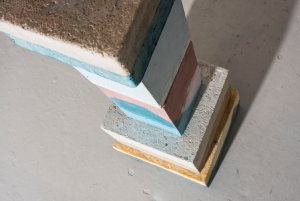 Considering the nature of this degree, it’s no surprise that language and the written word appear in many of the artist’s works.   Paola McClure’s work features precariously balanced columns of colourful rocks and bricks, “objects that stand on the tip of the tilt.” Accompanying them is a white plinth decorated with a thesaurus of words that celebrates the wealth of words that can be used to describe a “tilt”.

Marissa Cook’s work explores the “intersection between language and image.” Small boards mounted on shelves, like books in a library, display words or fragments of words, some printed, others handwritten, some blown up in size, others sanded down or painted over and scribbled on in pencil.  Cook investigates how these “layers of textural imagery interact like layers of thought.”

Doaa Yule’s work includes a dictionary definition of the word “red” next to a large blank canvas, which has been painted in a bright pillar-box red. She invites visitors to write on a sticker what the word red means to them and to stick their responses on the red canvas. An engaging and playful activity for everyone attending the show, over the opening  evening,  the canvas was transformed into a vibrant word picture – with emotions ranging from first love to jealousy and hate, and words such as tango, geranium and fire engine. 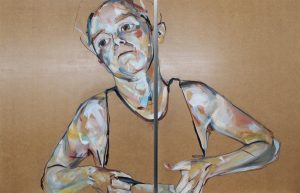 Katie Carlisle’s autobiographical self-portraits explore gender and identity.  She uses layers of multi-colored oil paints executed at speed with flat brushes to create stunning images. Skillful use of negative space around her body and head, and between the individual brush strokes, creates space for the viewer’s imagination to roam and for quiet reflection.  It is no mean feat when painting on such a large scale to capture such soulful facial expressions. Prior to the show, Katie explained to me, she had always painted on a much smaller scale. Working on these larger paintings presented an unforeseen challenge in ensuring that ‘blocks’ of individual colours remained distinct and didn’t mix together. 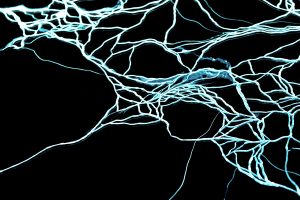 Amanda Solter’s work explores the concept of “embracing the chaos,” and she suggests that by ignoring the “inevitable chaotic flow of life. . . we suffer.” Solter’s premise is that humans are always in a state of change and an acceptance of this allows for new perspectives. On entry to the gallery there is a quote by the Greek philosopher Heraclitus, who wrote, “A thing rests by changing.” A series of regular white wooden cubes on the right hand wall undergo ‘metamorphosis’ to become vast elaborately decorated laser cut pieces of wood that are then transformed, in the same manner, into another series of white wooden cubes displayed along the left hand wall.  The evolution of Solter’s work and its unified nature fully embraces the viewer, creating a sense of reassurance and tranquility.

Crossing boundaries results in exploration and discovery; all the artists in this show have journeyed into new and exciting territory. A short review doesn’t do it justice. It’s a must see. Don’t miss it.