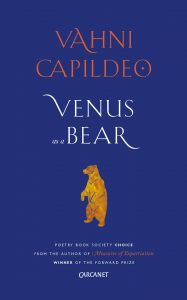 The intriguing title of Vahni Capildeo’s exquisite collection, Venus as a Bear, promises a kind of transformational prose, a mish-mash of animal and myth, of the ordinary and the extraordinary – and it surely delivers.  A winner of the 2016 Forward Poetry Prize, Capildeo is undoubtedly a worthy contender for this year’s prize. Capildeo’s verse is infused with her extensive background in Old Norse Literature, translation theory and her own Indian/Caribbean diaspora heritage.

The collection is split into chapters with each denoting the subject of the poems, such as “CREATURES” or “LANGUES/TONGUES”. The contents page is an early indication of Capildeo’s uncanny ability to collect, process and rearrange. Her attention to detail is striking, so much so that you may find yourself, as I did, googling the objects of her poems and sharing her infectious curiosity:

(ii) This picks up bits of pink
and not quite silverblue
like a glass you drink from
too early, and set down
too low, outdoors, in grass

Other poems are far more reactive, seemingly instinctual, like “& WHEN DESIRE FOR AIR NOT PIPED THROUGH FILTERS PICKS UP IN YOUR URGENT LEGS, REMEMBER” –

i never knew you; where’d you go,
who took you, juliet?
juliet? in your name
they tie my foot; can’t leave the house

– referring to the disappearance of Juliet Tam from Arima, Trinidad, in 1985. There are not many as stream-of-consciousness as this; however, the few that are feel like a necessary part of Capildeo’s process, an emotional cleansing for the poet. The visual quality of her more experimental verse – words scattered across the page in varying languages, letters arranged like crosswords – is not best captured here but adds to the value of the collection immensely, especially after rereading. “TIC TAC TOE” utilises the Os and Xs of the popular game, lining them up against questions of home, space and language.

Many poems take on a kind of persona – shifting and adapting to their subjects in such a way as to make it unclear just who is speaking. At times the voice is shrewd and witty, as that of a young woman making sense of the world around her; other times it is sarcastic, cold. This is perhaps a little off-putting at first, but clearly demonstrates Capildeo’s skill; she is able to imbue historical artworks and Latin phrases with personality and humour, without making a 21st Century mockery of them. In “SAYING YES TO ZEUS”, Capildeo reflects on a 5th century bronze statue:

Tall Zeus, forgive the mean aspect of this standard and static
Depiction your admirers should find problematic: squared-off
Toenails, small ears, some parts one shan’t mention [….]

Some of the finest and most enjoyable poems in the collection involve Capildeo experimenting with wordplay and sound, such as “BRANT GEESE”:

open a bubble of babble
swagger and swallow a vowel
turd it turn it shine it slime it
give it wings stretch it – a gaggle [.]

With their alliteration and sing-song rhythm these poems offer a reprieve from some of their more bewildering counterparts (see, for instance, “RIDDLES”).

Overall this is not a particularly emotional or sentimental collection, and much of it requires a strong cuppa and a good amount of thinking time – in fact, each poem should really be absorbed on an individual basis – yet this is precisely what makes reading Venus as a Bear such a rewarding experience. Capildeo’s grasp of language and its nuances is superb and her specialisms truly shine here. It’s easy to see why Capildeo has been nominated for the Forward prize a second time; her imaginative musings bounce from the page and help to capture historical objects and everyday life in a contemporary way.