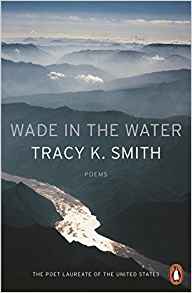 “If we had a vision and a feeling of all ordinary human life, it would be like hearing the grass grow […] and we should die of that roar which lies on the other side of silence.” (George Eliot, Middlemarch.)

The US Laureate, Tracy K. Smith, in her fourth collection of poetry, explores that “other side of silence”, capturing in her portrait of greed, oppression and hate crimes against fellow Black Americans, also the roaring sounds of love. In “Wade in the Water”, the poem bearing the collection’s title, she writes:

I love you in the Water
Where they pretended to wade,
Singing that blood-deep song[.]

Dedicated to the Gumchee Gullah Ring Shouters of Carolina, who “shout” about their West African roots, we hear those voices echoing throughout the entire collection. Expressions of suffering that these poems draw from past and present, are blended with such freshness to create an innovative political context for our engagement. Unlike her previous Pulitzer Prize-winning collection, Life on Mars, in which metaphors of space and science are deployed for the consideration of personal issues, and in particular the death of her scientist father, these poems draw on myth and biblical imagery, transcripts of letters, testimonies and public records, to reflect about identity, theft, deprivation of liberties, hate crimes and other indignities served on her ancestors, and compatriots today. The erasure poems focus our attention on the gravity of these matters with their words on the page mirroring those in the documents, consulted by Smith, after of all else has been erased. In “Declaration”, the stepped-down appearance is suggestive of a gravid, lowering of tone:

He has plundered-
ravaged our-
destroyed the lives of our-

And in another: “My mother said after my discharge that the reason the officer put my name down as John Wilson was he could draw my bounty”. The eloquence of these erasures is their economy of language, allowing the reader to “grapple” with the dense layers of meaning under those erasures. A more recent example of this misuse of power is “Watershed” about the disposal of “PFOA” (Perfluorooctanoic acid) into the water supply with catastrophic effects on human health, ecology and wildlife:

They knew this stuff was harmful
and they put it in the water anyway [.]

In “Ghazal”, tonally different from her erasure poems, she demonstrates her “mettle” as Laureate by not only adopting this established form of love poem but by loosening its formal constraints:

Having risen from moan to growl, growl to a hound’s low bray,
The voices catch. No priest, no sinner has yet been taught our name.

Anaphora gets her point across and lends both lyricism and poignancy to these last lines. The ekphrastic poem, “Unrest in Baton Rouge”, based on Jonathan Bachman’s image (2016) of an activist, for Black Lives Matter, holding her hands out to be manacled by the Police chimes in with Smith’s thoughts about how she, too, is positioned as a black American writing about America as poet Laureate:

Our bodies run with ink dark blood.
Blood pools in the pavement’s seams. […]

In her inaugural address as Laureate, Smith declared that she wanted to bring poetry to the community in ways that are meaningful and that reflect the full history of America. Her poems are not about the William Blake’s “mind-forged manacles”; these shackles are outwith, external.  Yet “Freed” by the chain gang of black writers and Ring Shouters who have fought this fight before – Langston Hughes, Countee Cullen, Gwendolyn Brooks to name but a few – her lines are built so resolutely with ideas and encoded with “love” that is, in itself, a password into a realm of freedom, equality and respect.