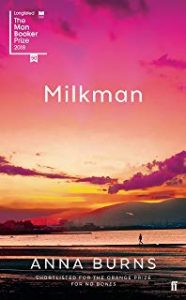 A novel’s first line is crucial. George Orwell’s 1984 (1949) begins, “It was a bright cold day in April and the clocks were striking thirteen.” Donna Tartt’s The Secret History (1992) begins, “The snow in the mountains was melting and Bunny had been dead for several weeks before we came to understand the gravity of our situation.”

Irish novelist Anna Burns’ latest offering Milkman (2018), shortlisted for the Man Booker prize, follows in this literary tradition: “The day Somebody McSomebody put a gun to my breast and called me a cat and threatened to shoot me was the same day the milkman died.” As this sentence suggests, the world of Burns’ Milkman is a coded one. Set in a small Northern Irish community during the height of the Troubles, our nameless 18-year-old protagonist assumes the role of code breaker – breaking down, questioning and dissembling, yet at the same time, attempting to adhere to the political, social and religious codes that exist.

This caustic novel concerns itself with the paranoia of these times and uses language to weave a complex fabric of gossip, private thought, public criticism and political consequence. Burns highlights the ineffectiveness of language in dealing with the conflicts in 1970s Ireland in a playful, illuminating way. The streets have no names; most of the characters have no names. Everybody is somebody’s sister or known by his or her profession – or reputation. What Milkman does is show that these reputations, in communities fraught with political conflict and mistrust such as this one, often exceed or disregard the people that live behind them. Yet no fingers are pointed. The community is absurd, but Burns, having experienced this environment herself growing up in the 1970s in Ardoyne, Belfast, understands, writes and navigates the absurdity with depth and clarity. In Milkman, it’s community versus outsider; men versus women; cats versus dogs; us versus them; tribe versus invader and action versus inaction. It is a dizzying battlefield of a book.

Even those whose wish not to take part in this battle can’t help but be forced. Our protagonist, much more concerned with her pre-20th century literature, shows how oftentimes the political becomes the personal against one’s will. She can’t help being from this community. She can’t help being a young girl in this community. Still, she will suffer for it all the same. As events unfold, our protagonist – referred to only as ‘maybe-girlfriend,’ ‘daughter mine,’ or ‘middle sister’ – feels further removed from her hometown – and herself: “At first, I could feel this reaction which confirmed I was alive, that I was in there, inside my body, experiencing this under-the-surface turbulence”.

Burns shows the struggle of adaption in environments that demands cultural non-assimilation, political secrecy and de-institutionalised judicial systems. As many prominent Irish writers have done before her (Samuel Beckett is a natural comparison given the freneticism in both authors’ writing styles), she highlights the complexity of an individual identity living in coexistence with tribal and gender identity: “This was not schizophrenia. This was living otherwise. This was underneath the trauma and the darkness, a normality trying to happen”.

This novel, like its conflicted protagonist – non-political but fierce, headstrong yet understandably frightened – reframes and re-contextualizes the Troubles from a perspective that wouldn’t have found a place in the history books, but also in a perspective that I and any other young women who have grown up in claustrophobic communities can relate to. This relatable protagonist translates the political chaos of the Troubles through her eyes and in doing so highlights its impact on the (not-so) quotidian lives of those just trying to get by. As its reception and prize nominations suggests – this novel’s place instead should be proudly on the nation’s bookshelves.