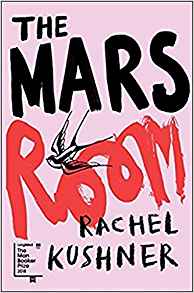 “I was woken at two a.m. and shackled and counted, Romy Leslie Hall, inmate W314159, and lined up with the others for an all-night ride up the valley.”

This is how we first meet our protagonist in Rachel Kushner’s third novel ‒ a 29 year old mother serving two life sentences for murdering her stalker. Immediately, two identities are laid before us: Romy the person, and Romy the number. Kushner shows us that society sees this woman solely as Inmate W314159. She is her crime. In an interview, the author explains,

“When people are given a life sentence, they’re taken on a bus trip up one of the big freeways from where they live, into industrial farming territory and are never heard from or seen again.”

Romy is lined up with ‘the others’, that label also being central to the novel’s themes. People are divided by hierarchies in every setting: guards and prisoners; whites and blacks; males, females and transsexuals; adults and children. We are witness to the organised hate of a man-woman transsexual within a women’s facility; the sexual abuse of a boy by his father, and the seduction and manipulation of vulnerable men on the outside – ‘Keaths’ – by female inmates. Unflinchingly, Kushner explores how such divides and classifications engender mistreatment and alienation

‘The Mars Room’ refers to a strip club where Romy used to work in San Francisco, a place with few rules and where ‘If you’d showered you had a competitive edge.’ The men there made her ‘numb to touch, and angry’ till she snapped one day. The moment she kills, she becomes simply a number of the machine. The murder, she explains, was not an active decision, but the working of ‘instincts’. A female, a poor female, is rarely in control – even of her own crime.

It could be argued that Romy’s ill-fate was determined long before her career as a sex worker. Born into a loveless home, her mother was ‘a gruff and chain-smoking German woman who gets by on marriage, divorce, and remarriage.’ Raped at age 11 and hooked on drugs thereafter, Romy is not alone and the novel contains a vibrant cast of well-drawn inmates from the same sea of political, sexual and poverty-induced hardship.

The structure is fittingly erratic. Romy’s story jumps back and forth in time and is interrupted by various other voices, flashbacks and perspectives. The narrative leaps from the micro to the macro, from first to third, in and then out. One of these supplementary stories is that of Doc, a corrupt cop and ex-lover of Romy’s acquaintance on death row. He is disgustingly awful, a cold-blooded murderer. And yet, in the telling of his own childhood demons, the novel once again highlights the human complexity involved with those branded by the word ‘prisoner.’

Kushner immerses us in Millennial America’s justice system and encourages our engagement and friendship with the lost girls who stumble through it. Their lives and their doing good do not disappear with the clack of the judge’s gavel.  The magic of The Mars Room is that it leaves you feeling conflicted, impassioned.  More importantly, it leaves you with your eyes stretched wide open.