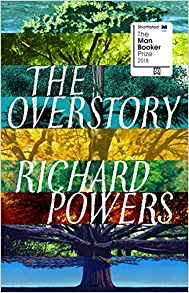 The Overstory is about trees. There’s more to it, but trees (‘The most wondrous products of four billion years of life’) are at its core. The novel casts no illusions about its focus or its intent, leading the reader into a sublime wander through forests and parks, building rage at the injustice meted out to the ancient woods, and glowing with a misanthropic optimism throughout.

The narrative begins with dispersed strands, twists hard to predict, and clings to individual stories across America. Themes bubble up quickly  ̶  childhood alienation, inevitable mortality  ̶  but plot is harder to glean. Connections are unveiled to the reader about the same time they are to the characters; the novel solidifies by degrees before its dramatic pinnacle, and then scatters its players to the wind. On the contents page, in keeping with the arboreal motif, its structure is listed as ‘Roots,’ ‘Trunk,’ ‘Crown’ and ‘Seeds.’

Later, as the various threads intertwine, the weight with which the characters move forward does not lessen. There is a suggestion of a whole, woven between the plot’s strands, a bringing together. At no point does the narrative become monolithic – certain threads remain distinct but, as one character remarks, ‘there are no individuals in a forest.’ Such remarks are frequent through the text – both aphorisms and reasoned conversation between characters build over the pages to shape a distinct philosophical position. Readers familiar with the work of James Lovelock will recognise the scientist’s name at the epigraph; Powers links his novel’s environmentalism on one hand to Ovid, Shakespeare, Confucius, and on the other to the contemporary activism of Occupy Wall Street, propped up with a strong foundation of science behind it all. The novel’s characters are themselves artists, actors and scientists from all walks of life. The author’s past life as a programmer is hinted at also, as the human capacity for connection and transformation is borne out in an unlikely parallel: video games.

Not everything about the novel is pleasant. Kicks come, often but not exclusively, as deaths or sudden accidents and hit hard. Powers has crafted moments, even at the end of the very first chapter, which force the reader to stop and breathe, step away from the page for a moment before continuing. Death is, by axiom, part of life. It is, as remarked upon many times through the book, both necessary and even beneficial, but there are no attempts to soften the blows of grief when they come.

The book is long, and the prose is dense with information. The first quarter of the novel could be seen as extraneous, contributing little to the later plot, laying down only winding backstories for characters who achieve little, yet it feels important to have these details. Such enrichment of the text could come out as clumsy, making the read sluggish and boring, but The Overstory handles its scale nimbly. The novel’s imagery, naturally, deals with colossal lifeforms. It stretches across inhuman timescales, expansive (but, tragically, shrinking) forestry. Over five hundred pages, the fates of human beings and trees alike are played out, like opposing forces. The novel chooses the latter as the more noble side, against fleshy brutishness and unnatural socially-driven appetites.

At his initiation into the activist community, midway through the novel, the character Adam Appich speaks about strategy: ‘The best arguments in the world won’t change a person’s mind. The only thing that can do that is a good story.’ The Overstory is that   ̶  a strategic novel. Carefully put together, a story built to change minds. It is written in such a way that every life it contains (humans and trees alike) gleams with a value that is unique to them, to be treasured and protected and, eventually, released. Powers’ writing takes patience and perspective to understand, but blooms when given time to grow.