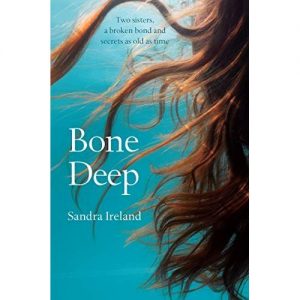 Bone Deep is a taut, psychological thriller which cleverly threads themes of love, betrayal and revenge through parallel stories.  The title, like that of Sandra Ireland’s debut novel, Beneath the Skin, conveys her fascination with the inner world: what compels people to act, and how their actions subsequently affect their psyche.

Mac, a retired academic, suffering from mild dementia and desperate to write the story of a local legend before she unravels completely, has reluctantly appointed a girl Friday. Lucie, estranged from her own family, finds the mill an ideal place to hide out. Through alternating first-person narrative, we see each woman grapple with their own secrets, each offering a perspective on the other.

Bone Deep was inspired by the landscape of Barry Mill, a National Trust for Scotland property, at which Ireland was a guide.  In 2017, Creative Scotland awarded her funding to undertake a writing residency at the Mill, which allowed her to observe the ever-changing moods of the historical setting. Ireland says she was fascinated by, ‘the rich culture of folklore surrounding milling in general and chose the Border Ballad of The Cruel Sister as the central strand in this very modern tale.’ This macabre ballad, included in Sir Walter Scott’s 1802 collection, The Minstrelsy of the Scottish Border, has crossed borders, oceans, and cultures; Ireland says, ‘In Bone Deep, I wondered what would happen if Lucie, my protagonist, began to see herself in the tale of the Two Sisters.’ Visiting the castle where the two sisters are reputed to have lived, Lucie reveals ‘I can almost see them, the two sisters, picking their way along the riverbank, skirting the reeds, chattering and giggling as the swans hiss and rear up at them…I can see the hem of a yellow dress disappearing into the trees.’

The ballad has at its core a simple but deadly premise. Two sisters go to water, in some versions a river or the sea, but often, as in Bone Deep, the disquieting dark of a mill pond. The older sibling pushes her sister into the deep water and refuses to rescue her. In some versions, she realises the horror of it and tries to grasp her sister’s hand, but mostly it’s a case of cold-blooded murder. Ireland’s version of the gothic grips, and her economical prose deftly paints a vivid picture of the abandoned watermill of the novel’s setting, its eerie folklore, and the quirky inhabitants of rural Fettermore, an imagined Angus village. Imagery is often tied to nature, ‘The truth. It shimmers at the edge of my vision like the dark of the kingfisher on the burn,’ and is unsettling.  The protagonists’ disquiet matches our own. ‘I don’t trust this landscape where the trees crackle with secrets and the water smells wild and the midges and the bugs and the birds take on a new urgency.’

Ireland’s main female characters are fascinating though neither is particularly likeable. Yet, we quickly come to care about them, and that we do is testimony to Ireland’s keen characterisation.   The male characters are less rounded – the feckless Reuben and Mac’s son, Arthur, the meek and mild baker – seen at one remove through the female characters’ lens; they are more narrative devices than fully fleshed individuals.  Even the hard-hearted miller is shadowy as ‘She cannot see his features, merely the shadows cast by them, and she’s suddenly afraid to look too closely in case that’s all there is.’

Sandra Ireland’s first novel was shortlisted for the Saltire Awards’ First Book of the Year Award. Bone Deep is a more assured novel, a thoroughly enjoyable page turner which starts peacefully like a millpond, but one which imperceptibly gathers pace as it races towards a conclusion that resists the draw towards either sentimentality or the macabre.