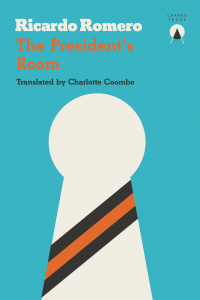 The suburbs of an unknown town seem to be as ordinary as it gets. The only thing making these places unique is that in every house there is a room reserved for the president. Nobody can use it and it has to be maintained to the highest standard at all times, for the visits are unpredictable. Some houses have never been visited by the president, at least according to the wise boy narrating. The president is at the centre of the narrator’s interests and worries; like some kind of gravity for thought, he is the mystery of an empty room, an obsession tainting every description and event.

Ricardo Romero is an Argentinian writer living in Buenos Aires. His tenth book, The President’s Room, is his first book to appear in English, thanks to Charlotte Coombe, a prolific and award-winning British translator.

At only 82 pages long, the book can be read in well under an hour. Most pages are only partly covered with text – some containing as little as one line. Although the book feels complete, it’s as if numerous paragraphs were deleted and parts of the story omitted for the reader to guess the truth.

The narrator often surprises with his insight; several pages feeling like a philosophical meditation. Perhaps the most striking is when the boy falls ill and describes how his skin is multiplied by the fever; he wonders whether his body sometimes belongs not only to him, but also to the air around him. He then compares skin to walls of adjacent buildings – how it hurts ‘not knowing which house a wall belongs to’, and finishes with a beautifully crafted sentence, ‘My skin is a wall and I don’t know what’s on one side and what’s on the other.’ Pages such as these are the highlight of the book, transforming The President’s Room into a sort of philosophical poetry book with a narrative thread. Poetry is not due to form, but to the independence of each page, its thought and idea. I could easily open the book on a random page and read it in the context of life itself, whether psychological or political, and spend hours marvelling at Romero’s thoughtfulness.

The plot itself is rather simple, although it leaves plenty of space for assumptions and guesswork. The child narrator is consumed by thoughts about the president, which friends he has visited, what to give him, or if he will ever visit the narrator’s house. As the story progresses, the boy bonds more and more with the president, thinking of more private and peculiar questions to ask him, for example whether he prefers the word ‘attic’ or ‘loft’. The boy keeps his entire investigation into the president to himself, pretending that nothing happens whenever he encounters his family members. Strangely, he feels his family is doing the same. The president and his room are taboo, which allows for some metaphorical ways to read the book. The president could be interpreted as a lost family member or, more abstractly, the plans and dreams locked away in a room never to be lived in, but always maintained by the daily ‘if A happens, I’ll do B’. Maybe that’s why the president comes only at night, when the whole family is dreaming of a better tomorrow or actually, a better yesterday. Maybe that’s why the boy is the only one seeing the president, for he still could live in the room one day, his dreams are not lost.

Combining mystery, insight and lyrical finesse, Romero has created a minimalist masterpiece. The President’s Room is a book that can be read multiple times and every time something new will pop up from the page, shifting the way the entire book is perceived. It’s a book not only to be read, but also in some ways, to be written and rewritten by its reader, and for that reason alone, it’s worth picking up.