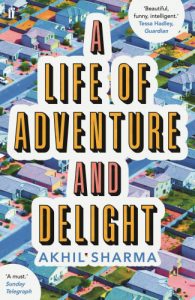 Simple stories are sometimes the most appealing ones. Love, trying to fit in or to find oneself are examples of themes present not only in Akhil Sharma’s short story collection, but also in the everyday lives of most people. However, these topics are also painfully commonplace in art and culture, and thus often feel cliched and shallow. This is definitely not the case in A Life of Adventure and Delight, a short collection so distinctive and memorable, that to think it could be labelled as shallow or regurgitated feels absurd.

Sharma has built his third collection around cultural differences, exposing the conflict between Indian and Western culture, something that, as an Indian living in New York, he’s an acute observer of. There’s a story depicting an Indian-American romance set in the US, with all the quirks that separate cultures as well as the universal thoughts and emotions that unite the whole world. Another story about a family that moved from India to New York is mostly about growing up, and is told by a boy who regularly prays to God as if he were talking to a friend.

Several stories are set in India, touching on arranged marriage and local politics, but every now and then the US comes up in the background, for example in ‘If You Sing Like That for Me’ the tale addresses the alternative ways in which an Indian girl’s life could have gone, if she had gone to the US to study, by comparing her to her sister, who made that choice. The cultural perspective is enough to recommend this book as original and worthwhile, but to make this the only argument wouldn’t do Sharma justice.

Sharma’s use of language and the way in which he builds thoughts is very striking. For example, ‘If You Sing Like That for Me’, which I believe to be the best short story in the whole collection, opens with these words:

Late one June afternoon, seven months after my wedding, I woke from a short, deep sleep, in love with my husband. I did not know then, lying in bed and looking out the window at the line of grey clouds, that my love would last only a few hours[…].

Sharma knows how to capture not only interest but also emotions. In the simplicity of his language he can be both funny and nostalgic, show anger, disappointment and happiness, always surprising the reader with what will come next. Again, from the same story, the narrator’s meditation is heart-breaking but also painfully real:

The author does a terrific job at shifting perspective. Even though the story always revolves around one particular character, others aren’t neglected. Most of the time, these secondary characters have equal presence as the main one, who’s often the narrator. After all that I got to know about them, I had to rethink who the main character really was.

Finally, Sharma deserves praise for showing the darkest corners of the human psyche, for conducting an impeccable analysis of what people think even though they’d never openly admit it. He paints the conflict between immediate satisfaction and long-term shame, and guilt. Making all his characters vulnerable, Sharma creates a book beyond cultural borders. He provides the reader with some sort of a mirror – what each reader sees is an individual matter; the view might be real or distorted, the glass surface more or less broken, but in the end it’s a book for everybody.