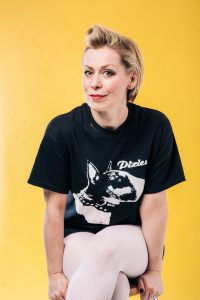 What drew you to Gagarin Way?

Well, Andrew [Andrew Panton, the artistic director at the Rep] approached me with the play and asked if I wanted to direct, which is unusual for me – I usually come up with and direct my own ideas for plays. But I was drawn to Gagarin Way in part because I’m from Fife; I connected with its themes of small-town poverty even though it was written almost 20 years ago. I also just think it’s a great read. It’s hilarious and shocking.

What did the creative team take into consideration when designing the set?

We did a lot of research, into factories and around the areas Burke grew up. Our designer [Emily James] visited Gagarin Way and factories in Fife to take pictures. The play was originally set in the basement of a factory, but we decided to do something different by setting it on the factory floor itself. This meant we could have the loading bay door, the outside world standing as a constant threat. It also meant we could be more theatrical, despite the play’s realism. (There’s a moment when a van is revealed behind the door which is very theatrical.) The set is also designed to sort of echo authoritarian Russian Soviet architecture, which reflects the thematic concerns with Communism in the play.

Were there any other ways you tried to make this production unique?

Well it’s interesting that we’ve got a full female creative team. That was partly Andrew’s thinking, I think, when he asked me; he thought, “okay, we’re going to bring it back, what can we do a bit differently?” …Whether or not that makes a significant difference to what you see onstage ‒ it probably doesn’t, it’s probably just for us to know inside ‒ but I think it’s an interesting process and experiment for a team of women to take on a very male, very violent, very muscular play…It actually felt incredibly organic and natural, it [still] doesn’t feel like that’s remotely a problem, why should it be? So you certainly won’t be getting a “girlified” version of Gagarin Way! …But I think what’s been lovely is that on the set we’ve got a beautiful team of actors, they’re all brilliant. And they’re all lovely men, and it’s been a kind of ideal microcosm of what gender parity can be. You’ve got, essentially, women instructing men…we’re telling them what to do. Essentially, they’re responding to that. And there’s not for one second been a hint “we’re bossing the blokes about”. It’s been a beautiful to-and-froing of ideas and creativity and you just think, “wow, that can work, can that be how it works in the rest of the world [now] please?”

What do you most want people to take away from this production?

It’s a two-pronged thing. You want audiences to have a good night out. I think they will get that because despite the darkness and the heaviness of the themes it is laugh-out-loud funny. So you have to balance that comedy and not let it override the more serious themes going on. There’s a kind of discourse about different political ideologies, capitalism versus communism. That’s the core of the play, there’s people verbally fighting  about ways to live and be…You’re trying to allow those arguments to breathe, and allow the audience intellectually to engage with that, but also you’ve got this bubbling humour all the way underneath… My job is to try and balance that, and let them brush up against each other without one flattening the other.

Ed: An interview conducted, Tuesday 16th October at the Rep. A review of Gagarin Way can be found by clicking HERE.