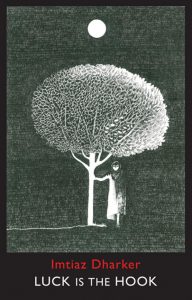 There’s an unexplained comfort in reading Luck is the Hook despite many of the poems dealing with pain and, often, discomfort. Each one contains a space devoid of explanation, a sacred place of intimacy for both the poet and the reader.

Awarded the Queen’s Gold Medal for Poetry in 2014, Luck is the Hook is Imtiaz Dharker’s seventh collection of poetry illustrated with 23 of her own drawings. These are black and white, each image relating to particular poems, and in their stylistic simplicity create a sense of unity within the collection. All drawings share a common sense of mystery, conveying emotions and allowing the reader to fully immerse himself (or herself) in the book and poet’s thinking.

Dharker’s use of metaphorical language has the exquisite capability of turning poems on their head and challenging preconceptions. In ‘Six pomegranate seeds’, both the title and the first stanza, which describes how the seeds burst on the tongue, suggest a descriptive, naturalistic poem. However, the second stanza brings an unexpected shift in tone, transcending what the pomegranate seeds are into:

the taste of the world I remembered,
the colour of gardens
before I threw away the sun.

Dharker brings these lines to life, creating a tonal intimacy, but still preserves its universal, impersonal reach, taking the world and the way people interact to a mystical, surreal level. There are poems where elephants walk across the frozen Thames and where pieces of broken china shift to create a new, wise, patient entity. Here swearing and praying is difficult to distinguish and only the rain can tell them apart. Not only her themes, but also her language contribute to the otherworldly effect. Dharker’s descriptions are clever, vivid and evocative. Take for example these final lines in Arc:

Even with all its colour washed away,
wet cloth slapped on stone,

thread beaten too thin,
my voice is still there, an arc
of drops hung in the air, sparkling.

These lines are stunning, both in the suggestion of brutality as well as the subtle flare of resistance – ‘sparkling’ at the end acting both as a farewell and a statement of presence. Otherworldliness is achieved not only through the suggestion of fantastical events, but a new way of seeing that world, sometimes something so exceptional that it doesn’t feel as if it belongs in the same picture with our everyday lives.

There are heartbreaking moments, overlaid with beauty, rendering them thus even more painful:

Besides poems about love, grief, journeys, believing and enquiring what makes a place worth calling a home, Dharker takes the time for understanding societal problems. For example in ‘The garden gnomes are on their mobile phones’, she describes a garden of gnomes occupied with technology, shopping and commodities.

Headphones on, the gnomes
will never know the sound

of the common yarrow
trying to grow.

In a very clever way, the poet contrasts the micro-scale of the garden with the world we live in, drawing parallels between the two, showing how not only the growth, but also death, is ignored:

The garden gnomes are devious.
They are singing

lullabies
to the unsuspecting phlox.

Luck is the Hook is a robust, rich and beautifully illustrated collection. It’s touching, nostalgic, heartwarming and humorous, offering an exquisite glimpse at our world, appreciating it for those things that remain hidden, omitted, not talked about. This book should be spoken about, enjoyed and returned to.