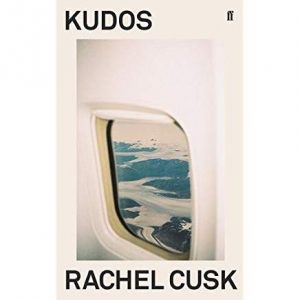 Faye, a middle-aged novelist, travels to a literary festival in an unnamed southern European city. On the plane she sits next to a man who recounts a story about his family and the trauma of burying the pet dog. Faye observes that he spoke:

as if he had discovered the power and pleasure of reliving events with their sting removed. The skill, I saw, lay in skirting close enough to what appeared to be the truth without allowing what you actually felt about it to regain its power over you.

Kudos is the final part of Rachel Cusk’s highly acclaimed trilogy and Faye is the central character throughout. Outline was published in 2014, and Transit in 2016. Faye’s encounter on the plane sets the pattern for the rest of the book. Everyone she meets has a tale to tell, and the story is told through a series of unconnected conversations.

As a newcomer to the trilogy, I was unsure what to make of a book without a traditional plot or a dramatic arc. As I read on, I found this narrative technique surprisingly compelling, a bit like unpacking a set of Russian dolls: each story separates out to reveal another story inside, which in turn has another story inside that. Faye is the perfect listener, yet there are few details about her physical appearance. Likewise, Cusk is sparing with her descriptions of the different settings in the novel. With concise settings, and without the distraction of Faye’s physicality or the mechanics of a plot, the way is clear for Cusk to focus on the characters and their stories.

This is the sheer delight of the book: the characters are sketched with perfectly honed observations and simply breeze to life. I re-read the descriptions of Faye’s fellow writer Linda several times just to savour the sheer joy of her creation. Faye’s publisher is a ‘delicate-looking man, dapperly dressed in a blazer,’ who smells of ‘ironing and cologne’ and wore: ‘a faint smile, while he spoke, and his light-blue eyes behind their glasses glittered with the diffidence of light glittering on water.’

People pour out their hearts to Faye and everyone is effortlessly eloquent; at times I found this a little contrived. The conversations are about difficulties with relationships, family, loss and loneliness. As you might expect, many of the conversations are about the literary world. I found these especially intriguing and enjoyed speculating on how much of this was based on Cusk’s own experiences as a writer. When Faye is interviewed by a succession of journalists all but one talk non-stop about their own lives and fails to ask any questions. I found this very amusing, true of so many occasions in life – give someone the floor and inevitably they will talk about themselves. Another character called Gerta expresses her disappointment with the festival they are attending, and with the calibre of the authors:

many of the writers invited here excelled at public appearances while producing work she found frankly mediocre. In the case of such people, she said, there are only the grounds: the building isn’t there, or if it is, it’s a temporary structure that will be swept away by the next storm.

Recently, I came close to telling a friend about an interesting conversation I’d had with a woman whilst sitting on a bench in a fragrant hotel garden. I stopped myself just in time, because I remembered that I hadn’t met the woman on a bench; I had met her on the pages of this novel. And this is the power of the book; the encounters with the characters are so engaging that they leave a lingering impression that you’ve met them, in real life.