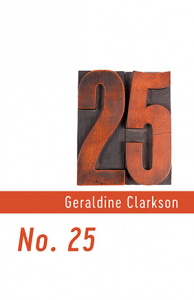 Poetics in Geraldine Clarkson’s work insist on our attention long before we have even embarked on our journey of understanding. Her latest chapbook is no exception.

The collection opens with a reference to the “lovely” and “elegant” River Leam in Clarkson’s home in the Midlands, from where she wanders in time and place, but the charge of “Hypocrite” is then unnervingly levelled, and things are not as they seem as “Leam lowered her gaze”.

Her images bring forth late 20th century familiar Irish and English scenes where the expected collides with the unusual and, at times, blatantly strange. Indeed, e-strangement is a hallmark of this daring and passionate poet. In ‘House Dreams’ she meets ‘a life-sized crib in the back garden, containing my father’ and in ‘Sons and Fraughters’ ‘the baby was brought up by dog-goblins.’

She weaves between forms of poetry and prose in search of her own identity and poetic voice, playfully enriching the work with homely domestic references to food, ‘a syllabus of syllabubs’. She is concerned with the central role of mother in childhood narratives which expose the social expectations placed on girls and women. In ‘Sons and Fraughters’:

The tone becomes almost psychedelic in the extended dramatic monologue prose poem ‘Melody’s Meadow’ where, as if in a scene from ‘Sergeant Pepper’, she is lying in her bed in the middle of a meadow where there are beds within beds. She sees:

A piano in the hedge, stuffed with old newspapers, which plays when I am asleep … it could be a mouse or a melodeon [.]

We meet the female in so many of her forms; the girl defined by Dad, the mother who made meals, the dutiful daughter, the little women who stitched, and the sister who appears in so many poems.

But the domestic scenes sometimes end ominously as in ‘Mother’s Meals’, ‘Knives sharpened on the stone step. Everything bleached afterwards’, where repeated sibilant sounds and truncated verbs indicate a stark and fearful threat.

In an almost staccato rhythm the description of the female form is an uneasy one  in ‘Spinster Soup’:

Clarkson’s very landscape seems to pulse with an undercurrent of sexuality, but here too there often lurks a menacing presence. In ‘Whole Salmon’ the positive symbolic overtones of reproduction are unseated by the innuendo of sexual abuse when the narrator is ‘gentled into a corner’ ‘where her cheeks have gone scarlet’, but the family friend chillingly remains ‘a lovable generous rogue, they say’.

In ‘The House Dream’, using an extended dramatic monologue form befitting the subject, Clarkson poignantly tries to recapture the past by repeatedly visiting the long ago sold family home where ‘under the floorboards, there is damp black earth and treasure’.  In ‘Melody’s Memoir’ she poetically embellishes what is essentially prose and in ‘A Thursday’ she uses short, clipped observations to add poignancy to a scene of death and mourning in the family home.

Clarkson’s work attempts to recapture and to hold again lost times and all that happened there, often in the setting of ‘the house’ so movingly portrayed in ‘Lament, My Natural Home’:

These were
never rooms for solitude […]
I wore you like an armour for fighting grief.

Clarkson fuses time, place, thought and imagination in the manner of a cinematographer. Here we are in the territory of the film, of the dream, of Freud’s royal road to the unconscious, where subject and object can be one, where past and present can be contemporaneous. Not surprisingly she was shortlisted in the first Annual Psychoanalysis & Poetry Competition. Indeed, in one of the many references to her sister she uses the clearly Freudian term ‘her other self’.

The collection closes appropriately in words recalling the Atlanta voice from cinema of Scarlet O’Hara: “Another fine day tomorrow, she drawled, headlocking a memory”.