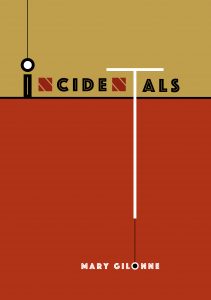 If light fails, follow darkness
in my eyes she says, unfolds the map

engraved on her, marks him with a cross
and draws him in.
(“The Woodman’s Tale”)

Just as the recently-deceased Nicolas Roeg’s film Insignificance plays lightly with several kinds of significance, only the foolhardy would draw easy assumptions from Incidentals’ title. The name of Mary Gilonne’s debut pamphlet may imply asides, but far from being casual, these poems arrest and examine moments, in both their strengths and frailty, before they are allowed to become fleeting. Incidentals offers small spaces of unexpected revelation, self-awareness and determination. As observed fragments, they are all highly significant and resonant.

Perhaps it’s worth considering the fitting nature of this publication’s form here. Currently, there is a real renaissance in poetry pamphlets, their scale appealing to many, for many reasons. Ally this with some very vibrant independent poetry presses which are producing exciting, well-designed and highly-affordable books. Pamphlet specialists are brandishing sometimes laudably subversive challenges to the established presses. How marvellous! 4Word Press is a recent arrival, and it is already earning its place as an adventurous publisher. As with their other publications, Claire Jefferson’s distinctively elegant cover sets the bar high from the outset. Mary Gilonne’s lines fulfil that promise.

English-born Gilonne has long been resident near Aix-en-Provence, where she works as a translator. The languages enjoyed here are drawn from three continents and there’s even an acrobatic foray into an English/ Esperanto macaronic. Her linguist’s delight in the layering and provenance of words is embedded in every poem; throughout, there is a feeling of travelling and of place.  The poet’s cartography is a sensuous one, drawn on flesh, and indeed tattooed through all of the senses. These are opulent poems, often gracefully, yet tautly erotic. Narratives are communicated in painterly visuals, and sound-rich imagery.   However, this poet’s careful crafting, and her formal restraint, ensures that these heady elements are wisely harnessed. Gilonne has a cleverly undercutting way, particularly with sharp stanza ‒ and poem ‒ ending lines, sometimes in the form of a refrain, and she slits into her riches intriguingly.  This poet writes beautifully of textiles, but she is equally adept at conveying muscle. Reader, be wary!

When from bed to wall lies a litter of windowed
moons to use as stepping-stones, and light slices
through our kitchen thrum, as if your voice and mine
cut blunt with metallic glints of old nicked knives,

In “Cardinale Frucci Covets Snow”, the poem’s initial impetus was ekphrastic, as it first appeared online in Visual Verse. However, it’s very satisfying to read it here. The poem works convincingly without that pictorial connection, allowing the reader a certain wander and wonder, before perhaps choosing to seek out the accompanying image. Then, there is the gift of almost another poem.  The equally visual “Quietus” evokes detail and sadness, rather as Millais’ Ophelia does, and makes the reader pause to consider kintsugi’s broken and mended quality. The pausing seems essential to the whole collection.

If Incidentals contains the sombre, including grave ill health, death, difficult and sometimes painfully pragmatic choices, there’s also the bitter-sweet of “Findings”, the “paged archaeology” of “a Twiggied girl in party Quant and curls”, and the glorious energy, both in word and typographic arrangement of “Sunday With Lili”.

Gilonne has a colourful, highly textured way with metaphor, ideally suited to exploring the sensory losses of “Ageusia”. Equally, “Equilibrium” allows her the balancing act of moving in and out of metaphor,

toeing a fine line between sense and none,
while high-wired idioms suspend my views.

She is no less adept with simile, for who could not be drawn to “skin indolent as wine”? Her closing poem offers procrastination of the most appealing kind.

Mary Gilonne’s publication and competition successes are impressive, and this gathering of her work is timely. Incidentals may be physically small, but its much larger allusions and connections make it perfectly formed.