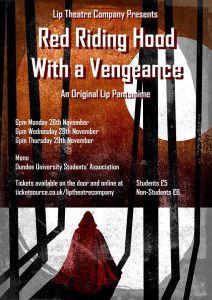 There’s a difficult question you immediately have to answer if you want to review a pantomime: is it fair to apply serious criticism to something that is, for all intents and purposes, ‘just a bit of fun?’ This is, after all, not a ‘serious play’ by any stretch of the imagination – it’s a parody and pretty much all of its characters and scenes are jokes, subversions or reversals. A pantomime doesn’t need to have anything approaching a significant or a coherent message, and neither does it pretend to. In that case, judging Lip Theatre’s Red Riding Hood: With a Vengeance in a serious context would just be overthinking the whole business, wouldn’t it?

I disagree. A bad joke, skilfully delivered, can be hysterically funny. Any pantomime worth its salt is proof of this. Lip Theatre Company has proven, over the last two years, that it has all the resources and talent it needs to make its annual panto an enjoyable night for everyone – its own members as well as the audience. What a shame it is, then, to report that the third effort by DUSA’s 2018 Society of the Year is under-prepared, under-produced and something of a mess.

The script of Red Riding Hood bears many of the unfortunate hallmarks of having been rushed. Indeed, the introduction alludes to hasty rewrites and problems with early production. The scenes, their settings predominantly lifted from previous years’ shows, follow on from each other in what could been mistaken for a random, meandering procession, with little in the way of a driving plot, and little to mark them apart from each other. As I’ve said, a panto can be forgiven for playing fast and loose with its story, but eschewing the story’s importance as a framework altogether is a different matter. In terms of pacing, this play feels like a slog at its best points, and an ordeal at its worst.

Most of the characters, in a similar vein, lack anything to really differentiate them. Without this, many of the jokes have difficulty landing with the audience, due to there being little to no chemistry between the characters delivering them. A lot of the dialogue is also padded out with needless swears – this is another element of the comedy in a pantomime that, when applied in the right proportions and with good timing, can be incredibly funny. I’m reminded of last year’s evil stepmother losing her composure mid-speech, to hilarious results. Instead, listening to these characters quickly becomes tiring, and the script gives the impression of trying too hard to shock.

Aside from the script, almost all of the production process appears to have also been neglected. Costumes, while characterful, have only been prepared for the principal cast, with many of the chorus wearing what appear to be everyday clothes. There is almost no set to speak of, with a few tables and chairs from the union having been brought onto the stage. Blocking and cues are minimal, and on opening night this resulted in awkward dance routines, slow scene transitions, and a chorus member clearly being hurt in what should have been a well-rehearsed pratfall.

The cast itself is strong – with standout performances by Rob Baird, Jacob Mcdonagh and Kate Wilson. Daniel Cutmore and Eleanor June also deserve recognition for some strong singing, despite the non-ideal sound tech in Mono. This is perhaps the most frustrating thing about Red Riding Hood – that Lip Theatre has clearly talented members, who haven’t been given a lot to work with. Despite the poor script and production, almost everyone on stage exhibited enthusiasm and skill. With so little backing up their efforts, however, the end product is little but wasted potential. That DUSA’s Society of the Year would let its own members down like this sits uncomfortably with this reviewer, like a bad joke.