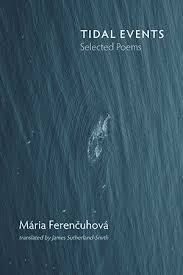 Every day
the new and new kind
lose their shyness.
They approach us,
look us in the eye,
lead us to the sea.

Without fear
together we stop to breathe. [‘Tidal Events’]

The boundaries between ‘them’ and ‘us’ are explored with utmost attention throughout Mária Ferenčuhová’s new Shearsman collection whether these be in relation to confronting people with animals, nature with the city, the wild with the tamed, or lovers with each other. Tidal Events: Selected Poems, translated by James Sutherland-Smith, introduces the Slovak poet to the English reader. She has published four poetry collections, translates from French and Ferenčuhová lectures at the Academy of Performing Arts in Bratislava and is herself also a translator; she has already published four poetry collections in Slovak.

Ferenčuhová’s language is precise and factual, yet her ability to create complex metaphors is in no way negatively affected by that. For example in ‘Heroes’, she opens the second part of the poem with the following line: ‘Like strings you draw your vocal cords from your throat.’ This brutal and raw description has poetic depth; imagining a human body as a primal instrument, something connecting pain with passion and can conjure beauty is one of many ideas coming at the reader like those eponymous tides. Those seemingly opposing ideas must not stand in opposition to each other – just like land and sea they can be all part of the same shoreline, sometimes clashing, other times mixing, but creating a unified idea that emerges as one.

The most striking conflict is drawn between nature and the city. It’s best illustrated in the first part of ‘Stupor’, titled ‘Logorrhoea’, wherein the poet presents different tales that the child might hear the day it asks for one. The first, set in nature, tells a story of future lovers, who

until at length they crumble like the rocks
towering over the road
into bloodbrown dust
and blend with the landscape.
Colour remains only a memory
like a postcard from a nearby resort.

In contrast, Ferenčuhová presents another tale, of an equally evocative urban landscape:

[…]the angular buildings
with a faded roof, with broken gates
and gutters, which twist away from the walls.

Descriptions are precise but they also help the poet merge ideas in the reader’s imagination. In the above urban description, gutters twisting away from the walls create in my mind a vision of people trapped in the city, throwing their arms out for help – the same people whose bodies crumble like rocks in the natural landscape. In both tales people are part of the landscape as much as they are absent from it.

Many of the poems deal with environmental issues, but this is not predominantly an activist collection. One goal that the collection seems to follow throughout is to combine concepts that intuitively don’t go together, and it does so in very clever ways, giving us lines such as ‘thoughts transparent as alcohol’, ‘disintegrated memory / debris in the air’ or ‘the horizon consists of outstretched hands’.

Ferenčuhová has a unique ability to delve deeply, demanding that we imagine every description, think about every idea, gasp at every well composed line. But these reactions come naturally. She creates a platform that can be used politically and also reach the reader’s psyche. Her detailed descriptions, sometimes referring to specific places on the map, lead to a world that can be read, understood and imagined by everybody, everywhere.

Tidal Events is a rich collection, full of ideas colliding on the brink of extinction and eternity. Often the verdict belongs to us. As Ferenčuhová writes herself:

Yet it depends on me as to what I turn my face.
Whether to wind, sun or rain.
Or stones. [‘The Uncertainty Principle’]