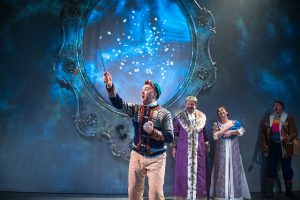 The Dundee Rep Ensemble’s latest production, The Snow Queen, in association with Noisemaker, is an enchanting Christmas epic. Based on Hans Christian Anderson’s classic, the show tells the story of Gerda, a young girl who must rescue her friend Kai after an ice-cold mirror shard falls in his eye and he is captured by the Snow Queen. Gerda (here played by Chiara Sparkes) travels through four realms, each themed around a different season, and encounters a cast of eccentric characters as funny as they are endearing. Helped by a team of unlikely friends, she completes her quest and saves Kai before his heart is turned to ice. Scott Gilmour and Claire McKenzie’s adaptation takes this basic formula and infuses it with enough twists and contemporary elements to make a fresh and enthralling adventure. 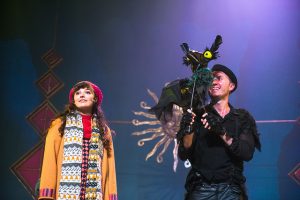 The set and technical aspects of the show are every bit as impressive as regulars will have come to expect from the Rep. Physical set pieces include a spinning fountain and rising platform, both used to spice up the choreography during musical numbers that don’t feature back-up dancers. The show also features expert puppetry in the form of Ewan Donald’s talking Crow. On the technical side, we have a screen that lights up with the words of the opening narration like an enchanted storybook. At other points the Snow Queen’s face is projected onto white fabric hanging over the stage, her fractured visage both uncanny and omnipresent. All of these practical and computer effects blend together seamlessly to make the show as dramatic and dynamic as a Disney blockbuster. The ultimate embodiment of this is the broken mirror that Kai is tasked to rebuild. The cracked pieces of the mirror are physically rearranged before our eyes, yet once rebuilt its surface comes alive, swirling with magic. 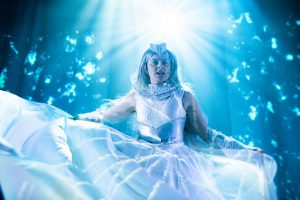 In terms of story, without giving too much away the final twist, though seeded well, feels a tad predictable (especially post-Frozen, probably the world’s most famous and loosest adaptation of Anderson’s story to date). Other new story elements landed better with me. Gerda’s questioning of whether she can – or even should – fix an evil caused by the greed and complacency of the generation before her hits home particularly hard. The inclusion of a same-sex romance is a delightful surprise. The show is isn’t short of humour either, as is fitting a Christmas production. The favourite of the group of girl guides sitting next to me on the night I attended seemed to be the “guardian of the North”: a feisty, irritable and overweight penguin (played by Ann Louise Ross). Meanwhile I couldn’t stop chuckling at Emily Winter’s Summer Princess and her Python-esque lisp. Between the laughs are some truly heart-warming scenes, like the relationship Gerda has with her grandmother (also Ross) and later with the bandit-turned-hero Hallie (Danielle Jam). Of course, it wouldn’t be The Snow Queen without a few scares either, and the Rep’s production delivers on that too. Then there are the little moments of magic, like cannons spraying snow onto the audience during the finale. 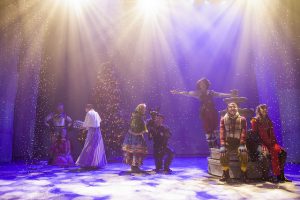 The production also features an original score. The songs are all enjoyable, and two days after seeing the show I still find myself humming “What if We Could Leave?” Some songs are once again reminiscent of Frozen or maybe Wicked (fitting perhaps, given the latter’s influence over the former), but this certainly isn’t a bad thing. My only complaint would be that, again on the night I attended, a few of the words were lost in an otherwise memorising solo number performed by Sophie Reid as The Snow Queen herself. The choreography is a joy to watch, at times graceful and spellbinding, at times fun and downright silly (Russel Horning’s dance “the floss” as popularised by the videogame Fortnite makes an appearance).

Overall, The Snow Queen is nothing short of spectacular. It is a modern and inventive retelling that loses none of the original story’s fairy-tale charm or warmth.