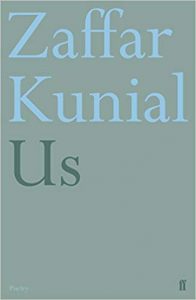 Since the release of his poetry collection in 2014, Zaffar Kunial has been known  for his exploration and experiment with language. His Anglo-Indian heritage means he can draw inspiration from both English and Urdu. Us has been praised, among many things, for a melding of languages and for Kunial’s flair for storytelling.

Poetry, and indeed art in general, is a subjective experience, individual from person to person. My own personal reading of this collection would differ vastly from that of a reviewer unfamiliar with the language and dialects Kunial refers to. Does this make for an exclusionary reading of the poet’s work?No, because the simplicity and directness with which Kunial often handles language makes his writing accessible to Urdu-speaking and non-Urdu-speaking readers alike.

Poems like ‘Tall Kahani’ bridge the gap between two lands and languages in a plain yet masterful way, by saying in English what the orginal is in Urdu:

As tale is to kahani
and lambi far too tall
so safar is our journey
as sab is to everything. That’s all.

As an Urdu speaker, there is a pleasure and comfort in reading these verses and to see Kunial work them seamlessly in his chosen rhythm and rhyme scheme. ‘Tall Kahani’ begins in this way but then explores the differences in word definition in both languages. The wordplay here is masterful and poignant. Kunialoffers Urdu pronounciations by using them in the context of their English meaning:

But, Dad, sab is our word for partly or under.
and to safar is to be under strife.
And if kaha means ‘where’, and nahi means ‘no’,
Then is kahani – your ‘story’ – from nowhere?

Beyond themes of language and identity, Us is charged with wonderful story telling and moments of delicate passion. Throughout the collection, the poet draws inspiration from figures in the English literary canon. In ‘The Lyric Eye’, Kunial cites Shakespeare’s A Midsummer Night’s Dream and delivers a vivid yet sensitive piece on looking and reflection. The poet’s diction and syntax make for arresting lines which are allowed to rest with you through his use of line spacing:

The same skill with language blossoms into moments of lyricism, continuing later to impress as a storyteller. Stories range from his childhood in Birmingham in ‘Sparkhill’, his telling of a fight in school, line spacing and topography conveys a sense of threat and immediacy:

Moments like these are welcome variations to what is otherwise a soft and mellow collection. The more prose-like poem in Us are filled with intimate details of Kunial’s family and heritage.

Zaffar Kunial’s fame continues to grow and his current collection, Us, shows readers why his poetry is taken note of and praised by critics and writers alike. Kunial wears many poetic hats in this collection, from one who is attentive to sound and language, to that of a storyteller. And the joy of this collection is in its quietness and moments where there is space for contemplation on the poet’s words.