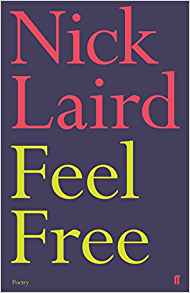 Nick Laird’s fourth book of poetry, Feel Free, is a cleverly arranged three-part collection exploring the two words of the title: what it is like to feel and the nature of being free, if indeed freedom exists at all. The poems cover a huge range, from metaphysical notions of justice and the meaning of existence, the everyday details of family life, to the pain of loss and love, often spanning these in close relation to each other in the deft strokes of a couple of lines.

In the opening poem ‘Glitch’ Laird drops the reader into a scene of having fallen and hurt his head. But the sharp details of the poem are subsumed by the last couplet where he has the feeling of ‘being wanted somewhere else’. This theme and its implicit question of ‘where are we?’ pervade this rich collection.

Laird is unafraid to make the processing of language and the art of constructing the poems explicit. In the stark yet haunting poem, ‘Not Having Children’, he leaves double spacing between the lines, and lists words which ‘lack rhyme’, to illustrate the absence of reproduction both within the making of the poem and in its theme of childlessness. In ‘Parentheses’, a poem which counterposes and links coexisting parts of life, he uses punctuation itself to denote aspects of living, referring to adult feelings of loss as brackets and bringing up children as hyphens. ‘The Vehicle and the Tenor’ closes with a powerful simile, movingly exposing the difficulty of accepting his mother’s’ death by naming features of language and poetics:

as you kept on lying in here, past all metaphor

left by yourself on the cleared stage like a real corpse.

County Tyrone, the place of his birth and childhood, is never far away – Laird currently has homes in New York and County Cork – not least in his phrasing and word choice where he relies heavily on the rhythms of Ulster speech. In ‘The Vehicle and The Tenor’ he refers to a ‘wee scaldy’. More menacingly, in one of the many references to the Troubles in Northern Ireland, in the final ‘Good Son’ set of sonnets which appear in all three sections of the collection, he mentions by name a man who at one time was the most wanted paramilitary in Northern Ireland, Dessie O’Hare. Several poems feature the love, longing and loss of his mother in a manner reminiscent of Heaney.

The collection is not without glimpses of humour, such as the hilariously named Shonique at the check-in desk at Newark airport. Poems nimbly switch from airports and information technology to profound enquiries, poking and prodding to explore the titular ‘feel’ of being alive, and often ending with the touch of a child or a detail from humdrum family life. However, perhaps Laird’s greatest strength is his consummate mastery of form and its relationship to the paradoxes and complexities of the collection’s themes. There are sonnets, villanelles and even a pantoum; in ‘Parenthesis’ Laird exquisitely links the tightness of the pantoum form to his mother’s death which was like ‘the hard return of a long death and the stanza break’. In the moving ‘The Folding’ the making of a paper snowflakes becomes a metaphor, ‘I know … that infinite complexity’s composed /by simple rules’, amplifying the paradox in the title of the collection, which can be interpreted as either an instruction or an invitation.

Laird is also a novelist, but of his poetry he says, ‘I’m happy for people not to get it the first time … so I don’t mind a bit of mystification or difficulty.’ After reading this collection we are left pondering modern life, freedom, the Troubles, death, the digital age and more. These exquisitely crafted poems offer us no answers to the questions in these issues, but they help us to explore our feelings about them.