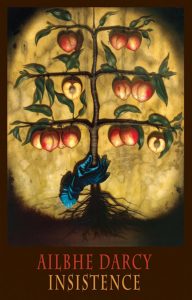 Ailbhe Darcy’s second collection is a literary force of nature fearlessly exploring themes of love and grief. Much like her debut collection, Imaginary Menagerie, which begins in Dublin and then stretches further afield, Darcy offers a dark telling of the world seen through her eyes. Similarly, in Insistence, an unsettling feeling of hopelessness and anxiety permeates traditionally safe spaces such as houses. With this, she questions the current affairs and growing scarcity of the world around her. Her experimentation with structure is bold, and through length and rhythm Darcy creates her own genre that combines poetry with formal hints of memoir and essay.

Much of the Irish poet’s imagery and symbolism is birthed from a clear relationship with the natural environment around her. This ecological awareness is portrayed through animals such as jellyfish and cockroaches, creatures that are perhaps insignificant until seen as a threat. Her descriptions often suggest a child-like perspective, offering sound and rhyme to create fluid imagery. Themes of parenthood connects Darcy with her audience, showing the everlasting worries of raising a child in a world of great sadness:

I love how it moves, so queerly eely through
that briny otherworld in which we can only splash.

Words such as ‘queerly eely’ allows the reader to picture the animal’s movements effectively, while also offering a contrast to more harrowing descriptions. Darcy’s style suggests a hyper-awareness of her surroundings. A sense of dislocation is heightened through the often god-like narration that she adopts; this voice seems to see all and yet not necessarily belong anywhere. Pieces such as ‘A guided tour of the house and its environs’ and ‘Jellyfish’ tackle a co-existence of death and domesticity. Through a broken structure that scatters lines unsymmetrically across the page, there is a powerful sense of chaos even within places of serenity:

Then you took in death’s full
murmuration on the strand– slug-pocked
with the dried-up sucker-marks –
child–
bossing your brother and sister around–
did you step on one crisp jellyfish?

Darcy references Karl Mathiesen, quoting that the creature is like a ‘karmic device’ and thrives on the ‘environmental chaos humans create’. Poems like this suggest an anxiety about the future where Darcy’s children will grow up. As the collection progresses, the reader becomes aware of her pregnancy and the birth of her child. ‘After my son was born’ is melancholic and startling in its brutality; the repetition of the word ‘blood’ is haunting. The short lines emphasise different acts of aggression, swiftly moving from one incident to another. In between these lines are glimpses of the war in Syria, and like many poems within the collection, leave the reader with an undeniable sense of hopelessness.

The collection concludes with ‘Alphabet’ which takes inspiration from Inger Christensen’s own ‘alphabet’. It begins with a singular line on a blank page and then gradually blooms into a troubling list  ‒ corruption and menacing snippets and scenarios: ‘maybe you are suffocated/ by spiking heat… angry and broken when scarcity thickens’. Visually, this finale is very powerful; each page is a letter of the alphabet allowing Darcy’s use of repetition to boldly shine.

Poems such as ‘Silver’ and ‘Service Not Included’ take more traditional forms, and perhaps stand out because of their shapelessness. They offer the trademark enchanting imagery and repetition, yet they seem confined. Each poem may vary in size and style to represent Darcy’s own state of mind while writing them, revealing that humans often cannot control when they feel most vulnerable. These  honest personal accounts communicate the challenges of motherhood and the problems of modernity powerfully.