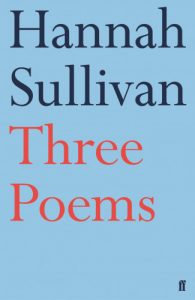 Hannah Sullivan’s first book of poems breathes, from the tumultous living of the opening poem through a steadier still-vibrant growth in the second, to the painful inspirations of the third. Having led an academic career on both sides of the Atlantic, she’s translated her keen observations of the minutia of existence into something moving and memorable.

‘You, Very Young in New York’, the first long poem of Three Poems, is recognisable to anyone who’s ever been young and embarked on the path to some imagined adult sophistication: the seen-it-all-done-it-all club. On the page, she explores boredom in the workplace and at parties, as well as negotiating through the ruthless world of adult relationships. She weaves youthful pain with sardonically drawn 21st century fashions and fads, identical with the narcissistic trends of the 70’s and beyond. The poem opens and ends with the invincible canted optimism of youth:

But the senses, laxly fed, are self-replenishing,
Fresh as the first time, so even the eventual

Sameness has a savour for you….

The poem, like the others here, moves between loosely rhyming tercets and prosaic free verse, couplets, cinquains, and quatrains. Each style represents a different aspect of the writer’s experience. When she’s at work and on the drug Ritalin, she seems to think in the brevity of couplets. When we venture into the city with her, the poem becomes more prosaic and blockier, dense with words, crammed with urban motion and images. Where rhymes take place they seem like an afterthought, created almost in insouciance; in the opening tercets, for example, rhymes alternate but then occasionally lapse. The effect of this stylistic tapestry is a lifelike reflection of her world.

Sullivan subtitles her second long poem, ‘Repeat Until Time’,  ‘The Heraclitus Poem’, and includes his quotation about experience being ever-changing with time’s flow. However, the subtext of each of the four sections within ‘Repeat Until Time’, which are further broken down into individual poems, is that no matter how much things change, they repeat themselves…they stay the same. In each of sections, we see a different aspect of Sullivan’s adult world. She’s now living in San Francisco, and many of the poems reflect a closer connection with nature. Some are almost bucolic, though Sullivan’s perception of what it is to be human in today’s world invades any sense of peacefulness as if those tuned to its survival can never feel completely at ease. (And, isn’t that true in our world?) In addition, these not-quite-idylls are allegories:

There’s no stepping twice in same or different rivers.
Nor would anyone step once if she hadn’t first shivered,
Toes spooning in the mud, watching an older sister
Striding through grasses, imperiously batting off butterflies. (1.1)

The collection’s sections are organised into themes: contemplation of rivers; life in San Francisco, including the loop of days, the occasional lurch into the bizarre that occurs when she passes a dead deer on her morning commute; death and love in her return to England to see her ailing father; the creation of the Universe and our discovery of our own smaller but effective Big Bang.

‘The Sandpit After Rain’ addresses a period in Sullivan’s life crowded with rites of passage.  A difficult birth followed a difficult death. Shocked by both and unable to feel joy, she writes of those experiences:

The blur of oxytocin after labour is called joy,
But it is only like the morphine someone dying dies enjoying,
And everyone else is vaguely embarrassed by [.]

There is nothing obvious about Sullivan’s craft(wo)manship. She wields the poet’s tools with subtlety and restraint, shaping a dignified but dynamic trio of poems. The result is an openly honest, beautifully workmanlike tale of her life so far… but also of my life and possibly of yours, as well.