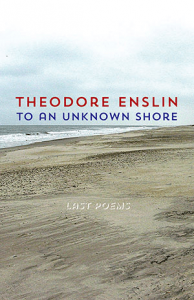 To an Unknown Shore is a collection of last poems by Theodore Enslin, the prolific, American avant-garde poet, who died in 2011. On the back cover he’s quoted as saying ‘I like to be considered as a composer who happens to use words instead of notes.’ His experience shows not only in the way he chooses words or creates the melody that each poem follows, but is evident in a sharp eye for detail, and an exquisite way of seeing the world. Perhaps the most striking showcase of this skill comes in ‘The air as’:

The air as
pane of glass
through which to
see what is there
to see seeing
only as breath
taken   a surprise
to see through
window glass
is only air [.]

To an Unknown Shore comes across as a meditation on the life’s journey and the world beyond the one known to the poet. In this melancholic collection, Enslin cruises through his memories, ignited by a stolen kiss or an old family photograph. His poems’ simplicity grabs the reader by the heart, pitch perfect for what needs to be said to encapsulate a feeling or a thought that’s both powerful and universal.

Two seams – flowers and light – recur throughout the book; Enslin uses his musical language to dissect both matters with extreme diligence, extracting the tiniest of details, as if they were independent from the subject were initially part of. In his philosophical musing, Enslin extrapolates these details, bringing them to life with peculiar lines like in ‘Shadow of the thing itself’:

these are the flowers brought inside
how do they sound in falling
out there?

This obsession with sound is prevalent throughout the collection and isn’t expressed only in the poetry’s content, but also through all the different ways Enslin employs to encapsulate sound and melody, or where he establishes rhythm through spacing words within a line just a little further apart to alter the cadence of the sentence. But even for such a master of melody, there’s only a limited range of poetic measures that can be used. There is, however, an unlimited breadth of thought that the poet carefully navigates to shed light upon the intricacies of sound, enriching the melody of his poems with enormous insight. In ‘Hermit Thrush’, Enslin invites the reader to listen to the bird, showing what the sounds it makes say about its story, or actually, what they conceal:

Listen to the solitary thrush
his heritage is full of sound
much of it what’s not known.

‘What is heard has passed us by’ is another short poem that combines the philosophical aspects of the collection and its attentiveness to the melodic beautifully:

What is heard has passed us by
music is in aftermath   not its stroke
to remember is in ordering
split and then returned to say
to hear before the echo.

This last poem hints at one more important part of the book: the aspect of passing. For in the same way the sound passes us by, so do we pass by the world ‒ experiences returning as memories which echo the original moment and  eventually becoming also sound in the minds of others.

To an Unknown Shore is, after all, a collection of Enslin’s last poems, which emanates from ‘Goodbye to all that world’:

Goodbye to all that world
where we once talked
as if there were no end
to it […]
It is here and not here
a way to walk and say goodbye.

The collection is as thought-provoking as it is moving, and can be enjoyed time and time again, with an occasional tear running down one’s smiling face.