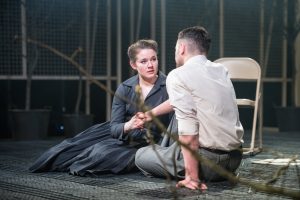 Arthur Miller’s post-war family drama, All My Sons is not the first time the Dundee Rep Ensemble has taken on work by the American playwright. Their 2017 production of Death of a Salesman was widely praised and this their second stab at a Miller play is another success. However, Miller’s play is a first for director Jemima Levick whose character-driven approach results in a gripping and emotional production that is layered and full of depth.

Set in the 1940s in the Midwestern United States, the story centres on the Keller family as they commemorate the loss of Larry Keller, a pilot who went missing during the war. Kate Keller (Irene Macdougall), Larry’s mother, believes him to be alive while father Joe (Barrie Hunter) and brother Chris (Daniel Cahill) believe otherwise and look to move on with their lives. Through conversations and interactions amongst themselves and with their neighbours, we unearth the truth.

All My Sons takes place in the Kellers’ garden, which is made to look bare and brutal: bare trees and metal mesh fencing edge the stage’s perimeter with metal chairs turned inwards. The stage is supposed to be a home yard but instead resembles a prison yard – which speaks to aspects of the play later. The stage floor is covered by black plastic crates- palettes which, as well as adding visual interest, grounds the play further and provides a metonymic link to Joe Keller’s factory business. The play’s minimalist set is cold and isolating, giving the characters no place to hide. Sparse use of props gives the characters space both physical and otherwise to establish the relationships, tensions that are essential to this play’s success. Levick’s staging choices tell the audience something about the members of the Keller family, for example the father, Joe Keller (Barrie Hunter) spends much of his time centre-stage and is central to the plot. This larger-than-life character demands our attention, and prevents us from questioning things too much in an attempt to remain neutral.

Changes in light and sound design is also used sparingly and help accentuate the play’s shifting moods. When the mood is light the stage lighting reflects this, but as the tension ramps up, particularly in a key scene between Joe and Chris Keller, we see lighting and effects suggesting a storm to enhance the drama. In other moments, sombre music and ambient lighting help draw out the emotions of a mother who reminisces about Larry in a moving monologue. The Rep’s considered approach is also seen in the use of costumes. Levick visually communicates the personality of her characters through her colour palette. Characters with secrets and dubious intentions are clothed darkly, while others who lighten the play’s tone are dressed to indicate as much.

Levick’s direction commands more from her cast whose performances are strong across the board, from established ensemble members to visiting actors and graduate newcomers alike. Every character has their moment, from comedic levity with the Lubeys or Bayliss’ to unsettling dread with the appearance of George Deever (Ewan Donald). While the cast handles the dialogue-heavy production with the range and emotion necessary to deliver the play’s shocks and reveals, it is the unspoken nuances that resonate the most.The cast display a great deal of timing and control with their lines which is needed for certain moments of the play; subtle details – fidgeting with a hat or wringing hands – tell the unseen stories between characters. A letter with information about Larry is revealed in a slow and measured way that pulls the audience in.

The Rep ensemble starts off its new year with a punch-in-the-gut adaptation of Miller’s classic. By stripping back its set design and leaning its weight more heavily on its cast’s performances, All My Sons offers a captivating and emotional time at the theatre.