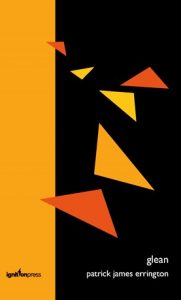 Errington’s debut collection comes as a tight, coarse publication, 18 poems across 21 pages, buzzing with energy from cover to cover. The work sits astride the writer’s recently completed PhD at the University of St Andrews, arguing that a poem’s meaning is ‘co-created’ between the text and the reader themselves. In his poetry, Errington’s objective seems to be to skip over the sensory and the objective, and dive straight into the emotional, evoking feelings deep below the skin.

Glean’s poetry resists close reading in the way that a dream might, rarely painting anything as clear as a picture, but instead snatching moments and stitching them together.  The reader must approach the collection like a jigsaw puzzle, scrutinizing pieces but patiently allowing the picture to form in completion. From a broader view certain motifs do appear, of winter, honey, or broken bones, but require labour on the part of the reader to uncover. Errington uses second person consistently throughout.The ‘you’ is imbued with all that the writer wishes to convey, gifted with all kinds of experiences; feelings are expressed in terms of ‘your body’, recalling ‘your father’ and the way ‘you’ve always loved the smoothness’ in various ways. The reader, in taking on this ‘you’, has some presence in the works but also, uncommonly, some agency. In ‘On Highway 2A Near Blackfalds, Alberta, as Night Comes On’, the ‘you’ is told,

will never rub them smooth. I’m not sure
you’d ever want to. But then again, I’m not
you (and you’re welcome). Maybe though
you wouldn’t mind – maybe just this once

and, in keeping with Errington’s thesis that readers should respond with poetry and not to it, we are asked to take a role in the poem, and become part of the meaning ourselves.

‘On Highway…’ is one of Glean’s more lucid poems, a portrait of ‘towns like the memories of towns,’ rolling through on a regular four-line structure. Errington is fond of couplets, but entries like ‘Little Lit’ are difficult to grasp by combing a line at a time, running on continuously and dropping punctuation midway. Individual phrases are wonderfully rich morsels at times, boiled down and then stretched out to, ‘the moon comes muffled by the streetlamps that buzz // in their glass hives, drooling honey. Your breath scrapes,’ the form preventing any one idea from existing in isolation. These couplets are at their most interesting where broken, as in ‘Yew: Directive’ ‒

‒ in which the line snaps on the page, diverting and jolting the image, imbuing it with a sense of unease. Manipulation of the form reappears in ‘Lessons in River Reading, 1997’, a long poem unbroken into stanzas, but which washes back and forth in a repeating pattern of indentations, forming ripples four lines deep.

Curiously absent from Glean are any kind of rhyme, assonance or alliteration; Errington does not seem to play with the sound of words at all. If anything, the continual use of enjambment makes the poetry jarring to read aloud, almost every image dismembered as it leaves the mouth. The length of the volume is to its benefit – such strictness of form and density of subject might grow tiresome over a longer scale, but Glean ends quickly enough to hold the interest.

Errington’s idea that a reader should be an active participant in a poem as they read is borne out here. Glean is challenging to read, ironically murky in its meanings; readers who take pleasure from poetic landscaping and sensory transportation might come away from this collection frustrated. The way to read these poems is not as a riddle of imagery but an evocative force, stirring the reader’s heart and fusing with their memories.