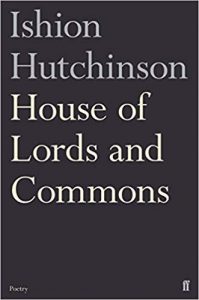 When a new poetry collection has gained as much accolade as this second collection by Ishion Hutchinson, we can assume it’s something special. The title seems to refer to both highs and lows in his own life, high and low cultures, from the mythology of the Greeks to the Jamaican classroom of his childhood, and also ranging widely between. The poems vary in structure and length, from couplets and tercets through free verse and even beyond; ‘The Night Autobiographies of Leopold Dice’ is four breathless pages long, with no line breaks and a single full stop at the end, reflecting the subject of the poem ‒ that no one can ‘outtalk Leopold Dice’.

Hutchinson obviously knows a lot of things about a lot of things. As well as tales about his native Jamaica he covers Italy, music – from the studios of his rapper friend Scratch to Sibelius and Marley – history, mythology and numerous others. This erudition, layered with dense and opaque sentences, and heavy with metaphor makes for difficulty in understanding many of the poems. But perhaps the points is, as he says himself in ‘The March’, not to ‘get too hung up on the terms’. There is plenty to appreciate about the poems,  much like hearing a song in a foreign language, you might not understand the meaning but you can feel its beauty and can be moved by it. Many of the poems are lyrical and evocative, though not always beautiful in subject matter. It’s clear that Hutchinson doesn’t have a rose-tinted view of his old life in Jamaica.  ‘Fitzy and the Revolution’ describes events when the sugar cane cutters don’t get paid, leaving men ‘thirsty for blood and rum’. What first seems like humour and irony, with lines such as:

Better to crucify Christ again.
Slaughter newborns, strike down the cattle,
But to make a man not have money in his pocket on a payday Friday was abomination itself

The final line of the poem encapsulates the title of the collection when, speaking of the shopkeeper Fitzy he says, ‘And with an overseer’s scorn, he nodded them in’. But there is affection for the island life too. ‘The Night Autobiographies of Leopold Dice’ uses the story of one man to paint a bright picture of past island life:

Where he met the local baker, May, selling her coconut drops, grater cakes, gizzadas, potato puddings with hallelujah in the middle, her ginger beer so strong it burned his throat for days, purged him clean of wonder, rum, and other women[.]

Who wouldn’t want a childhood memory with ‘hallelujah in the middle’?

A recurring theme is Hutchinson’s absent father. The collection is bookended with their relationship, beginning with ‘The Station’ where they are reunited and he sees a ‘stranger, father, cackling rat’, and culminating with the final stanza of ‘A Small Dark Interior’ in which watching a small child leads him to a place where ‘I am ready to forgive my father his own flawed life’. For all the complexity of the collection though, my favourite poem is one of the simplest. ‘Moved by the Beauty of Trees’ appears like a pause in the complex collection:

The beauty of the leaves stills her;
She is stillness staring at the leaves.

The repetition throughout of the word ‘still’ is a zephyr, cooling the passion of the other poems.

This is not a collection to be read once and put aside. Each reading brings further meaning to the poems, and sometimes maybe your own ‘hallelujah’ moment. It is worth the effort.