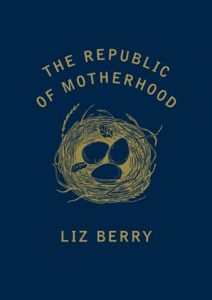 Birmingham based Liz Berry’s most recent offering is a pamphlet of varied and relentlessly honest poems about new motherhood. At times heartbreakingly loving, at others pulling a sideways punch at the world as the new mother, this fierce yet poignant little collection is not afraid to expose the complexity of the experience, including its morally and emotionally, as well as the more obvious physically, uncomfortable moments.

The eponymous poem canters powerfully through the gamut of different settings in which the mother experiences her new, bewildering identity. She visits the hospital, the municipal baths and various other institutions requiring her presence, and as such this opening poem is a taste of what is to come for both her and the reader. The poem’s scaffold is the metaphor of state and statehood, the Republic thereby cleverly addressing mothers in general notwithstanding the first-person persona. Indeed, this inclusive sense of community is a hallmark of the whole collection, a fine example of what poetry does at its best ‒ reaching out to the universal from the particular and the personal.

‘The Republic of Motherhood’ is held together and progressed by a developing rhythm created in part by the dogged repetition of the dactylic word ‘Motherhood’, which is echoed by other features of the Republic that share the same metre: boulevard, factory, hospital, cemeteries, and the more personal daffodils, cardigan, uniform.

Having begun as a feminist social critique, this odyssey of a poem becomes a prayer ultimately, almost a paean to the sorrow of the fallen of Motherhood who have suffered birth trauma and psychosis; the powerful Republic, with its capital letter, is replaced by the embracing and ironically lower status ‘whole wild fucking queendom’ with none.

Allusions to the natural world capture the basic animalistic elements of birth and motherhood. ‘Horse Heart’ opens in a stable, celebrating the messiah in every new life, and ends with a profound statement of love for the mother’s ‘little horse heart foal’. In ‘The Yellow Curtains’, her daughter is ‘The small face in the oaks. Blessed little goose.’

The vulnerability of the modern nativity mother is revisited in ‘The Spiritualist Church’ where she stands outside with her baby begging to be taken in, but there is clearly no room at the inn. The pain of motherhood is palpable and never far away; in the ‘dolorous’ sky in ‘Spiritualist Church’, in the ‘too heartsore’ messages in ‘Bobowler’, and typical of this most rooted of poets and champion of her own Midlands dialect, in the onomatopoeic clem-gutted in ‘Marie’.

There are vivid, often lurid descriptions of the birth process itself, which counterbalance in content and poetic value the more tender moments. In ‘Placenta’, a mother’s visceral account of burying her own afterbirth, she spaces out certain words to create a sense of the life of the thing almost moving across the page:

and in ‘Sky Birth’ she uses spacing to create the crescendo of birth contractions likening them to climbing a mountain,

There are gloriously giving moments of love between mother and child, as in the exquisitely titled ‘So Tenderly It Moves Them’ where ‘new mothers are singing from their lamp-lit houses’ during night feeds. But motherhood makes these same mothers ‘weep through rain-blurred windscreens.’ This raw yet beautifully wrought collection defies designation,  bravely facing the contradictory nature of the whole thing, with a life force pulsating, appropriately enough, to all its beats and rhythms.