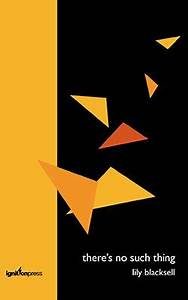 Reading Lily Blacksell’s poetry is like watching a tragic movie, going to a comedy show and listening to an album of greatest hits on vinyl, all at the same time.

This description, from the blurb of Lily Blacksell’s debut pamphlet there’s no such thing, is brilliantly accurate. The British writer, currently based in New York, has already been nominated for the Pushcart Prize 2017 and Best New Poets 2017. Reading there’s no such thing, it’s easy to see why. It’s fourteen poems are urgent and chaotic. Sometimes, they’re downright wacky. However, Blacksell holds them together with a profound ear for language and a cracking sense of humour.

The pamphlet is deeply rooted in music and pop-culture. Each poem seems to gather its rhythm and cadence from the artist who inhabits it: Nina Simone in ‘Nonina’, Annie Lennox in ‘Sparrow’s Kneecaps’, Dobie Gray in ‘Who cares for the feeling of feeling alone’, to name just a few. The opening poem ‘Girl Reaction’ tells the story of a gig involving Mick Jagger and a cup of piss. The voice immediately shines with youth and humour:

Thinking about it makes me mad and I mean it
in both senses of the word, not because I was
fourteen years old and just about out of my mind
with esteem, or because the burger-van man
said he didn’t like my sunglasses […]

The long sentences, chatty tone and sparse punctuation seems not only to authentically mirror natural storytelling, they also create a fast pace that continues throughout the collection. Blacksell hits the ground running and doesn’t stop for a breath.

Perhaps already suggested by the title’s lack of capitalisation, there’s no such thing takes no heed of expectation or tradition. Two of the poems stop in the middle of sentences. All of them manipulate white space, punctuation and pace to reach exhilarating levels of vivacity. The last poem, aptly titled ‘Giddy’, has almost no punctuation at all.

Poetry as lively and chaotic as Blacksell’s runs the risk of leaving the reading feeling overwhelmed. However, she continuously engages with her audience; ‘I already gave that away’ she admits in ‘The Ballad of Standing a Chance’. There is an intimacy achieved throughout, punctuated with conversation markers such as, ‘I’d like to say’ and ‘no kidding’. In the midst of the chaos, she keeps us right there with her.

Despite its humour, the pamphlet explores some delicate themes. Blacksell deliberately transcends her chatty, anecdotal tone to surprise us with poignant truths, moments of suffering. One example is the handling of motherhood in ‘Sparrow’s Kneecaps’:

years ago when her goods became
our goods too and twice over
they cut her body in two
and this the thanks she gets.

Blackwell tends to parallel these larger issues with details of the mundane or domestic. In ‘The Stirrups’ both falling off a horse and abortions are likened to ‘coming adrift’. In ‘we are to blame for the decline of giraffes and only we can save them’, the break-down of a domestic relationship is paired with the diminishing of an entire species:

This time, it’s global, you told him, it’s urgent
there are nine islands of giraffes left in the wild.

But he’d be aware if he’d been listening.

This bleeding between micro and macro, and the accompanying tonal shift, seems organic when applied by Blacksell’s deft hand.

there’s no such thing is a collection of poetry so jam-packed that its threads will unravel in your mind for days after reading it. A collection that mentions Beyoncé, the Illuminati, a Freud finger puppet, Emma Watson, Freddie Mercury and the Cookie Monster, it somehow still manages to truly convey the sombre side of human experience.