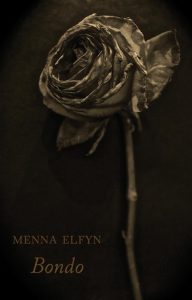 Menna Elfyn was born near Swansea in 1951. She was brought up with the Welsh language at home and in Chapel and raised during a time when teaching Welsh at school was not promoted. Elfyn is a renowned professor of Poetry and Creative Writing, at the University of Wales Trinity St. David’s in Carmarthen, where the effects of the protests for language equality were felt in the ‘90’s when I studied there.

Elfyn has written extensively over the past twenty years, producing over twenty volumes of poetry, stage plays and essays. Her work has been translated into many languages worldwide. Her latest collection of poetry, Bondo,  was initially composed in Welsh and then translated into English.

Bondo is split into three sections. The first focuses on nostalgia. In a recent BBC 3 Radio interview Elfyn said, ‘There’s a Welsh word, hiraeth, which most people know is nostalgia … and it’s like looking towards the horizon, what’s beyond. And writing poetry is all about imagining what’s beyond and what’s possible and where you can’t go back to where you were. Things change.’

The first poem in the Bondo collection is ‘Niwlo (Misting)’ is undertaken as a response to the Basque writer Arantxa Urretabzkaia. It speaks of Wales being known for “Fields, air, rain, as you say,/and our long hide and seek in the mountains’ where water permeates and is ever present: ‘the speckling of drops/that cloud our eyes’ and ‘the misting in the air.’ Both are water but one is a person’s response through tears, and the other is nature. Hiraeth flows though this poem ‘But this is where we yearn/for our own acre of creation,’ The tone is mellow and soothing. Hope is felt in the final stanza, glowing and as the pride of a nation.

but sometimes
our eyes will rise
for a sudden
incandescence.

The poem “Bondo” (“Benediction of Eaves”) focuses on protection of the fledglings nestled safely in the eaves:-

Benediction of eaves.
Blessings to all paired things
they shield.

The poem commences in a slow, prayerful manner; the paces then hastens with the joyous migration, ‘songs spill from summer gables.’ As evening approaches, “Bondo”  slows as the lure of the eaves is calming and once again prayerful.

Elfyn’s poetry is lilting and melodic. In “Ysgol Gân y druduns” (“Singing School for Starlings”), the birds’ singing is likened to the many voices singing in a Gymanfa Canu- a Welsh singing festival for sacred songs which are held across Wales:

they wake on the wing, humming,
to the earth’s four corners,
… their Gymanfa in full voice.

The second section contains two poems by Hedd Wynn, who died in WW1, and was posthumously awarded the Bard’s chair at the Eisteddfod in 1917.

Bondo’s final section has poems dedicated to the tragedy that befell Aberfan on October 21st, 1966 and show a harsher change of tone, as befits the undercurrent of despair.  From the first stanza of “Llym awel” (“Lament”), which is about ‘The birthplace and the grave in Aberfan’,  through to the final stanza, ‘Though the days are dark they spell the truth. / Love – the endless song of the heart’, the words are wrought with anguish; its agony felt deep.

Sadly, Elfyn’s grandfather died in a mining accident and Y Glwyd (“The Gate”) was composed in his memory. It was written after the Gleision colliery tragedy in 2011. People worldwide felt its affects, like a stone falling into water, its ripples dispersed.

Sometimes
a day like a lightning-bolt
will remind us that there’s only
a breeze under the door between us and death. Yesterday,
men died, underground[.]

Elfyn combines a powerful voice and a bardic quality to her poetry. The poems are short but powerful; their rich cadences soar to the lofty heights, the sentiments and hiraeth understood the world over.