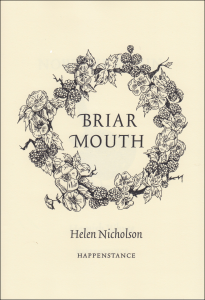 Briar Mouth is the first published collection of poems by Helen Nicholson. She has had poems published in Gutter, and Magma magazines and shortlisted in the Bridport Creative Writing Competition, 2015. She lived near Fort William as a child, spending time in Skye, and now lives in Fife. These locations are clearly reflected in her poetic interests, from the West in ‘A Family History’, to the chill of East coast sea mist in ‘Haars and Sea Frets’.

I had thought that ‘Briar Mouth’, the title poem of the collection, would be a nature poem given the garland of fruit and flowers on the front cover. It isn’t. It’s much more. It offers a powerful reflection on communication.

There is a thoughtful scattering of broken words on the page, which, when read aloud conveys viscerally the halting speech of someone with a stammer.

The white spaces between the words and between the parts of broken words are not even. The eye is thus cleverly unsettled by this, followed by the heart. The metaphor of brambles in the mouth, rather than smooth pebbles, is agony in the telling,

The painful inability to say the words out loud with ease is heightened through a contrast with the deliciousness of the brambles’, ‘occasional soft dark fruit’ enjoyed

These words convey their power through the continued stammer; the poet contrasting ‘chanted’ and ‘mutely’ in the lines that follow so we hear both words and silence:

The poem ends with the richly satisfying silent, soothing rhythm of the ‘favourite sounds’

In her ‘Elegy to John Nicholson’, words have been chosen from a Gaelic dictionary to suggest the girth of a man’s life.

Each section sits as a short meditation, complete in itself. Together they build a powerful lament towards the climax of the ‘huge receding wave’. Setting that life within its natural Gaelic speaking community, linking it to the earth and nature, and imbuing it with love makes this poem very moving. Here is a poet for whom the adage ‘less is more’ was invented.

There are poems in Briar Mouth which offer delightfully strong images. I am unlikely to forget ‘Helen Hamilton in Old Age’ as she

Helen Nicholson has immortalised him in Haiku, the tight form emphasising the impact of this powerful character, finally diminished:

There is a gentleness to Helen Nicholson’s poems which belies their power to touch on truths.  In ‘Sticks and Stones’ there’s an uncomfortable echo from schooldays in bad naming the smelly boy who helps his mother gut fish and

His isolation made more pointed by the commanding nickname given to the son of the shopkeeper and her sailor husband, whose status allows him to sit

‘Advice to Students of “Gaelic Cultural Studies’ is subtle in its appeal against romanticising a bygone age of Gaelic speaking communities. ‘My Bonnie Prince’ gives us a story of The Young Pretender with a twist. I hope it’s true. It’s funny.

This first collection of Helen Nicholson’s poems is a garland of delights, gather it up, it has fruits aplenty.