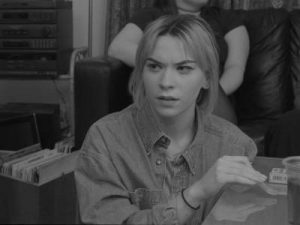 Dundee based director Joel Hewett’s latest production comes to the DCA for a single screening, alongside Daniel Taylor’s One Night Stand. Recorded with partly improvised dialogue, the film trails a handful of characters as their relationships tumble, taking a gentle look at a turbulent but common situation.

Hewett himself plays Jack, freshly dumped, being propped up by friends Sarah (Lauren Dunlop) and Richey (Lewis Skelly) as he processes the breakup and gets his life back on track. Scenes are played out mostly as conversations, skipping between locations across the city – often consisting of one long take in which the actors chatter (babble, even) and joke. The bond between individuals on screen feels authentic, laughter treading the line between genuine humour and a break in character. Dialogue manages not to wander too far and sticks to the film’s plot even when clearly unscripted.

Waterproof is shot in black and white, its visual style marking it out as an independent project. The monochrome treatment washes over what might be coarseness in lighting or design, and imbues the film with a slick timeless quality. Much of the direction could trace its roots to French ‘new wave’ pictures like Godard’s À Bout de Souffle, famous for its long conversational scenes, tracking shots and jump cuts, all of which Hewett employs here,  admittedly with a less sardonic protagonist at his core. Similarities can also be drawn with more recent productions, including Alex Lehmann’s 2016 film Blue Jay. The stripped-back feeling to the film is present in both, as is the naturalistic play between the actors, and although Waterproof doesn’t quite manage to hit the intimacy found in the other film, the comparison is a deserved compliment to the cast.

Between social encounters, wordless montages shuttle the film around. Urban scenery does not bask in Dundee’s landmarks but does not hide the city either – locals will recognise spots easily. The crisp contrast of the black and white imbues the apparently unremarkable buildings with a kind of beauty; even tenement buildings which another director might frame as oppressive are bright or alluring. The film’s sense of Scottishness is not based in social realist alienation or against some English identity, but rather shown through community within the city. The characters’ misery is individual to them, not borne onto them by society or even those around them – Jack’s former partner is named (as ‘Laura’) but never seen on screen. Following an argument between Sarah and Richey, the two sit together but turn away from each other, both hunched. Later Richey faces Jack and says “I want to hate you,” but cannot follow through on the sentiment.

This connectivity is supported in the way that virtually every face on screen is some friend (or friend-of-a-friend) to the lead characters. Midway into the final act, Jack is approached in the park by Chris (Simon Reynolds) with a call of “oh hey, do I know you?” and promptly invited to a party later that night. Up to that point Chris had been painted as something of an oddball in anecdotes, and subject to awkward conversation the only time the two had met, but Hewett allows a figure who could easily be the butt of a joke the chance to flesh themselves out, and become part of the broad family at the heart of the script. Even extras in bar or cafe scenes are given close-ups of their own and allowed some feeling or private life rather than just being faces on screen. This charity with otherwise disposable characters feels possible precisely because Waterproof is an independent film, made cheaply, employing friends and family as actors but avoiding crowds of anonymous passers-by.

The resulting warmth is what keeps Waterproof going, that stops long periods of chatter from growing stale. It keeps the film afloat even through the lack of effective plot, and makes an asset of its low budget.