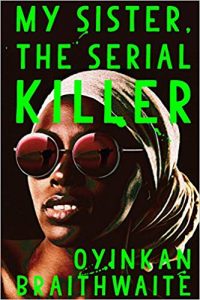 With its stylish cover and alluring title, Oyinkan Braithwaite’s debut novel is as striking as it looks. My Sister, the Serial Killer tells you everything you need to know before the opening pages. But that’s not to say it’s predictable and doesn’t surprise at times.  The novel centres around two sisters, Korede, a nurse, and her younger sister Ayoola. Ayoola has killed all her previous boyfriends, and each time she has called for the help of her older sister to dispose of the body and clean up the crime scene. But when Ayoola begins dating a doctor from Korede’s hospital, a doctor Korede is in love with, the tensions between the sisters begin to rise. Will Ayoola be able to save her love before he ends up lying face down with a knife in his back?

My Sister, the Serial Killer is a fun and swift-moving novel which takes no time at all to get through. Right from the off, we get a sense of the sisters’ dynamics and how their personalities differ. Korede, older, more rational thinking, pines over Tade, a doctor in her hospital, whilst Ayoola moves effortlessly from boyfriend to boyfriend, spending her time posting pictures on Snapchat and Instagram: ‘#FemiDurandIsMissing has gone viral. One post in particular is drawing a lot of attention – Ayoola’s’ Braithwaite blends a refreshing and contemporary style with dark humour which keep the reader entertained throughout. Delivered in shortsnapshot chapters, the novel moves at a swift pace, feeling as spontaneous as Korede’s sister Ayoola. Narrated from Korede’s perspective, the relationship between the sisters is the driving force of this novel: ‘Your sister wants to be around you, you know. You are her best friend.It is my mother […] Mother still talks about Ayoola as if she were a child, rather than a woman who rarely hears the word “no”. ‘

These moments are among the most lively in the novel, giving us a taste of something we can all identify with. Another of Braithwaite’s strengths is in the witty humour that comes from her characters:

“Yinka, where is my sister?” I wheeze.
“Ayoola?”
“Yes. The only sister I have.”
“How would I know? I didn’t even know you had one sister before, for all I know you people are ten.”

Just as the cover of the novel is visually appealing, but contains something darker within, so too does Korede and Ayoola’s relationship. In the intermittent chapters titled ‘Father’, we learn about why Ayoola is the way she is with men. Behind a glamorous façade lies something much more sinister.

It is difficult to place this novel. Yes, it’s about a serial killer, yes, it’s a dark comedy but it isn’t as thrilling as you might expect a novel about a serial killer to be. The focus is very much on the bond between the two sisters. There are moments which tease at something gripping or which raise the stakes but they are quickly dismissed – such as the search of Korede’s car. What makes it even more frustrating is the ending. It ends quite abruptly with a very unsatisfactory conclusion – or without a conclusion at all.

My Sister, the Serial Killer is a fun, breeze of a novel with plenty of entertaining moments throughout. Although the story within leaves a little more to be desired, the characters and their relationships are genuine and likeable.