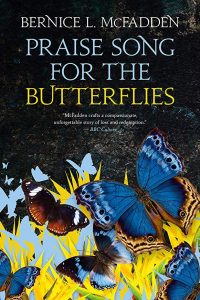 ‘Tell all the truth but tell it slant’

If Emily Dickinson’s much-quoted line is a poets’ mantra, not for the first time reviewing, I have to ask – surely its application is wider? When Picasso unleashed Guernica‘s terrible pain and fury, how could he tell that trauma, other than slant? A creative act, burning the world’s consciousness endures and develops as the event’s factual reporting never did, nor can. Often there are practical reasons for avoiding the documentary, perhaps matters of privacy, politics or oppression. Possibly Bernice L. McFadden weighed up some of these considerations when she wrote Praise Song for the Butterflies as fiction. Set in Ukemby (a thinly-hidden Ghana), McFadden’s tale follows Abeo, a prosperous young girl of African and American heritage. Her fate is to be the sacrificial gift in the now-outlawed practice of trokosi: ‘The word trokosi comes from the Ewe words tro, meaning deity or fetish, and kosi, meaning female slave.’

Harrowing, essential subject matter. Add in American connections, the slave trade’s legacy, and this African-American writer’s source is potent. Consider too the intergenerational practices as Ukemby’s socially aspirant, urban middle-class moves uneasily from the previous generation’s practices. Moves which have a universal aspect, but become significantly more extreme in the context of this rapidly developing nation.

McFadden visited Ghana in 2007 (an earlier form of this book was published that year), and researched extensively. The effects of condemning female children to a life of rape in the name of religion, in living history, are extreme, with obvious parallels. Her subject matter can hardly be more lacerating or relevant. All this indicates a difficult but necessary read, poised to change the lives of those who read Praise Song for the Butterflies, and in turn, those who do not. With her explosive research into great wrong, and a string of awards for earlier writing, Bernice L. McFadden’s book readies to sear, to expose by telling the truth slant. But McFadden is no Picasso. Picasso’s concept has been delivered by Steven Brown, portraitist of rainbow Highland cattle. In writer’s terms, Seamus Heaney failed to record The Troubles, offering his thoughts to a passing Instagram poet for Hallmark’s use. That’s how bad Praise Song for the Butterflies really is. Alas.

Certainly, there is an issue, even for truly brilliant writers, when their subject matter is this extreme. The pre-eminent humanitarian activist and writer Arundhati Roy was faced with that perhaps unresolved problem in The Ministry of Utmost Happiness. However, I find it impossible to justify the prize listing of this book, which seems all hurried narrative and undrawn characters, with scant respect for the written word. Even the writer seems to tire of her creation, tying her knots quickly and blatantly to reach ‘The End’.

Structurally, it’s a plot which can’t be termed a page-turner, so obvious are its coming turns. Yes, the victim metes out justice to the villain, and meets a lovely man who rights everything. Her long-lost alcoholic mother sorts herself out and becomes the perfect parent. An embarrassingly glib plot any well-read 10-year-old would reject. At the level of word, it is a string of clichés, only close to being saved by the percussive use of the protagonist’s age, and one underdeveloped device as three women give birth.

Praise Song for the Butterflies‘ litany of information and happenings delivers with didactic dryness, telling, but rarely showing. Fill-in backstories are tossed in regularly, with remarkably convenient revelations. If this has a genre, then it encompasses those chafing celebrity pleas integral to television fundraisers. I am uncomfortable making this harsh assessment. Doubtless there is a market for this book, but the 2007 Chair (Muriel Gray) of the judging panel’s remarks about ‘dross’ echo. It’s not difficult to imagine what Jackie Kay or Maya Angelou might have done with these materials, or, best of all, Toni Morrison. As it stands it proves that important subjects do not in themselves deliver art.