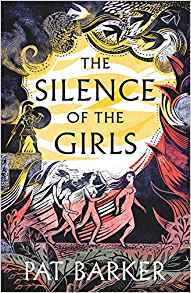 Modern feminist revisions of Greek mythology are in vogue. Following Madeleine Miller’s feminist reworking of Homer’s Iliad (The Song of Achilles, 2012) and The Odyssey (Circe, 2018), Pat Barker’s The Silence of the Girls also retells the story of The Iliad from a female perspective. Where Patroclus, Achilles’ steadfast companion, narrates Miller’s Trojan tale of gender inequality, Barker’s story is told from the viewpoint of the women history has consigned to the margins. These are the women captured and transported to ‘rape-camps,’ as trophy concubines and slaves to serve their warrior captors. They are the spoils of war.

In a foreword, Barker quotes Philip Roth from The Human Stain, who states that all European Literature starts with a quarrel, including the strife between Achilles and Agamemnon: ‘And what are they quarreling about, these two violent, mighty souls? It’s a basic barroom brawl. They are quarreling over a woman. A girl, really. A girl stolen from her father. A girl abducted in war.’

Roth’s words go directly to the heart of the plot. Barker narrates the story principally via Briseis, the 19-year-old queen of conquered Lyrnessus – a girl ‘abducted in war.’ The Trojan War is almost a decade old. Briseis becomes Achilles’ ‘bed girl’ just hours after she’s witnessed him slaughter her husband, father and three brothers ‘in that poised, leisurely, elegant way of his.’ Later, she will be passed from Achilles to Agamemnon after his own war-prize, Chryseis, is restored to her father to appease Apollo and end a plague in the camp. Following reconciliation between Agamemnon and Achilles, Briseis will be passed back to Achilles.

Aside from the relentless bloody slaughter of war, the politics of the camp do somewhat resemble those of a testosterone-fueled barroom. Amongst the men there is intrigue, jealously, pride, stubbornness, misogyny and ribaldry. The singling out of Briseis as Achilles’ prize is portrayed as an act of public entertainment:

‘Cheers, lads,’ he said. ‘She’ll do. And everyone, every single man in that vast arena, laughed.’

That Barker avoids archaic language in favour of contemporary vernacular enhances rather than detracts from the authenticity of the narrative. When the men are all gathered to feast together they sing drinking songs, which will resonate with the reader – ‘Why was he born so beautiful/ Why was he born at all?’ The Greek soldiers argue over whether King Menelaus should simply execute his wife, Helen —the reason the war was waged in the first place—or ‘fuck her first, then kill her.’ They chant abusive and obscene songs about Helen and her fate: ‘When she’s dead but not forgotten / Dig her up and fuck her rotten.’

Briseis struggles to preserve self-belief and maintain dignity in the face of such brutality and indifference towards her sex. The captured women lack power, but Barker is determined that their voices should be heard. A strong sense of solidarity exists amongst them. They are healers, confidantes and counsellors to each other. They know the various sexual proclivities of the Greek men and are able to help each other cope with the impact of these. Through pain, loss and grief, they are sometimes also able to laugh. They look out for each other.

The violent content is not easy to read, however Barker has an eye for fine detail and the narrative flows well through the eyes of Briseis and, in part, through those of Achilles. As the book closes, Briseis contemplates the deaths of young men in war. Far worse, she thinks, is the fate of women who survive: ‘I looked at Andromache who’d have to live the rest of her amputated life as a slave, and I thought, We need a new song.’

‘Silence,’ Ajax says, ‘becomes a woman.’ But Barker disagrees. She feels the women have been silent for too long. Her mission is to orchestrate their new song.