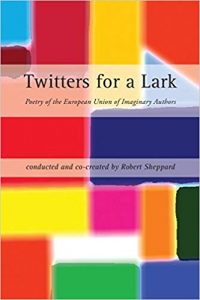 Twitters for a Lark is not a single-author collection nor is it, strictly speaking, an anthology. What is hidden behind the colourful book cover emblazed with the words ‘Poetry of the European Union of Imaginary Authors’ is a unique endeavour bringing together some of Britain’s most innovative and exciting contemporary poetic voices. The book contains collaborative creative work undertaken by Robert Sheppard with Kelvin Corcoran, Allen Fisher, S.J. Fowler, Robert Hampson, Sandeep Parmar and Philip Terry (to name just a few of the 24 poets involved). Twitters for a Lark ‘s ‘anthology’ is filled with the work of imagined poets – each from one of the EU’s 28 countries. Each imaginary poet has his or her name at the  top of the selection, while the actual creators of the imaginary poet’s work are listed at the end of the selection.

With more than 50 publications including poetry collections, pamphlets, artists books, edited volumes and critical literature under his belt, Robert Sheppard is one of the veterans of Britain’s experimental poetry scene. Anyone familiar with his work will not be surprised by this latest twist in his monumental oeuvre. Twitters for a Lark follows Sheppard’s 2013 volume A Translated Man (Shearsman) which presents the collected writing of the fictional Belgian poet René Van Valckenborch, a founding member of the European Union of Imaginary Authors, as we are informed in the volume’s suitably tongue-in-cheek introduction.

What awaits the reader in the anthology is a fascinating mix of poetic forms and voices, mirroring the diversity of the continent itself. More traditional, lyric poems are juxtaposed with conceptual pieces; sound poetry sits beside prose forms. There are poems using visual elements like lines, different fonts and type sizes, as well as pages filled with orderly tercets.

The subject matter of the poems is just as diverse as their form. Readers will find themselves stumbling from the surreal sandy craters of ‘Small Choruses on Mars’ (a Fisher/Sheppard collaboration), where

(it is the contribution for Finland, in case you were wondering), straight into the Parisian outskirts. Here we join a migrant worker on her day of drudgery, until

The Polish contribution (Anamaría Crowe Serrano / Robert Sheppard) presents a ‘Museum of Polish Military Defeat’ including entries for various artefacts such as a ‘missing button from military uniform’, ‘rain’, ‘tears’ and

This highly political piece transitions over to more personal themes. There is love, as in this Hampton/Sheppard collaboration:

Fittingly, it is the UK which provides the collection’s final entry, as if already on its way out (although the poems where written prior to the 2016 referendum).

In the age of Brexit, getting a group of mostly British poets to pretend they were fictional European nationals can easily seem like a bad idea. My own European sentiments tell me we have had too many instances of Brits creating their own narrative of Europe with little concern what is actually happening on the continent. Yet, Twitters for a Lark’s version of Europe is anything but prescriptive. Its collaborative endeavour celebrates diversity, its playful irony makes it endearing to the very last: the collection’s final poem is a homage to probably the world’s most famous fictional poet, Ern Malley.