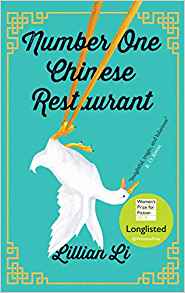 This is the debut novel from Lillian Li, a graduate of the University of Michigan, whose previous work has been published in prestigious titles such as the New York Times and Granta. It is an intergenerational family saga set in a US Chinese restaurant. The restaurant’s speciality is Beijing Duck, the waiters even wearing “duck-patterned ties”, a symbol for the Chinese restaurants through which many immigrant families have established themselves in America.

Li’s deftly-drawn characters give us an insight into this life. The owners, the Han brothers, manage the inevitable tensions among a large staff of mixed ages. Nan, the elderly experienced manager ‘looked like an agitated collie,’ symbolising the energy of the place. Ah-Jack is equally as experienced but no longer able to carry heavy dishes from the kitchen, and we feel the frustrations of ageing in a scene near the beginning when he drops a dish and is left ‘cradling his left hand like an injured bird.’ Jimmy and Johnny are the sons and inheritors of the now deceased owner of the restaurant. Annie and Pat are the dislikeable teenage children for whom ‘every day at a Chinese restaurant was bring your kid to work day.’ Like most teenagers, they yearn to break free of their families and make their own lives, which lead to disastrous consequences.

The relationships in this novel are complex and real, none more so than that between Nan and Ah-Jack. Despite both being married, they clearly have a special connection: ‘A bridge materialised between them transporting secret packages that would never reach their destinations.’ The humour and heartache in their subsequent relationship is engaging and heartbreakingly honest. However, the evocative descriptions in this novel are its real strength. They create a sense of place and of the characters’ experience of this place: ‘The summer heat was oppressive even at ten at night, like an oven that had only recently been turned off.’ The characters work hard, long hours in the restaurant, resulting in relationships which can be difficult and tense, but also loving and caring. When Ah-Jack has an accident in the kitchen, Nan takes him to the hospital and looks after him, and it is culinary imagery Li uses to describe the effect of the medication; ‘The heavy, floating quality of his body, like a fish ball bobbing in warm broth.’

Humour and warmth are prevalent in the descriptions in this work, and atmosphere is beautifully created, but, for me, what is missing is pace. Dramatic events occur in the novel,but because we know how the characters will react, there is no tension. It is almost like knowing members of your own family, so that nothing is a surprise. Perhaps this is Li’s intention. There is no doubt that, by the end of the novel, you feel you have entered another world and been part of another family for a little while.

The novel deals with universal themes such as family, relationships, love and work. It makes us consider our own lives and motivations. It is relentlessly realistic. At the end, Jimmy recognises that his new restaurant is ‘only another cage, slightly larger, slightly fancier, but not so different, after all, from his father’s glory,’ whilst at the same time acknowledging ‘he would not be Jimmy if he did not keep trying.’ Contentment surely comes from accepting that, in the end, that is all we can do.