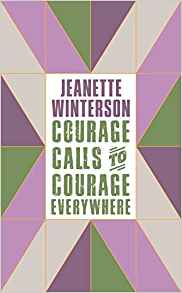 ‘Courage calls to courage everywhere, and its voice cannot be denied.’ Celebrated author Jeanette Winterson takes the first phrase of Millicent Fawcett’s stirring words for the title of her work on the achievements of women since the 19th century. This diminutive book, developed from her 2018 Richard Dimbleby Lectures, appearing flyweight at less than A5 size and only 71 pages, sits firmly in the heavy weight class for the power of its punch.

Winterson published Courage in the 100th anniversary year since the passing of the Representation of the People Act which provided some women the right to vote. She describes the challenges to, and eventual victory of, the Suffragettes as their activities became progressively militant in response to the wall of contempt put up by men around them.  Her discussion of decades more of struggle  up to the present holds all the more relevance following in the wake of the #MeToo movement.

Women have had to fight for equality in every aspect of social interaction.  The Reform Act of 1832, the Marriage Bar, and the medical condition, ‘Anorexia Scholastica‘, an eating disorder which was though to occur with too much mental stimulation were only some of the tools used to suppress women. The right to be educated, to apply for financing, to do equal work for equal pay, to speak out if sexually harassed or not to be harassed in the first place, were all battles made and are still being fought.

Winterson writes with a marvellous voice, as if chatting with you across the table. Her sense of humour and passion come through in her cadence and repetition of phrases. She uses cool logic and and speaks with equipoise regarding both sexes, which gives her writing authority, observing, ‘and we do need parity, because women are one half of the population’:

I feel sorry for men who have to keep hearing this stuff because they don’t notice it either. They aren’t behaving like sexist shits (mainly), it’s really, truly and honestly that men in public life is just the norm. We’re not gender-blind—in fact, I think we see double—we notice a few women here and there, and we think, oh, this is equality—look, there is a woman.

She suggests further readings and shares links to media sites devoted to parity. Winterson celebrates the contributions of celebrity women and welcomes the #MeToo movement.

Mathematician Jack Good believed, ‘the last invention will be Artificial Intelligence. After that… the major decisions won’t be ours to make.’ In a field where female influence is sorely needed, more women must enter computer science to boost their current graduate statistics of 18%.

Then, Winterson looks further into the future that includes all of us:

In any case, if we’re going to end sexism, men and women alike will have to work together.
There is no other way.
And there is no better way.
I don’t want a world where men and women can’t flirt with each other, can’t take pleasure in beauty, can’t enjoy sex or sexual power or sexual difference, but biology is not destiny—and there is no reason why women should not be equal, why women should not be safe at home or at work, just because they are women.

Winterson closes this wee firebrand with Emeline Pankhurst’s 1913 speech, ‘Freedom or Death’, delivered when she sailed to America between prison sentences. She had been released long enough to recover her strength from a hunger strike and was reincarcerated under the terms of the Cat and Mouse Act upon her return to England.

Courage Calls to Courage Everywhere should be on everyone’s shelf. The struggle for gender equality is as important to keep in the memory as the atrocities of slavery, racial cleansings, and the rise of fascism. In forty or one hundred years Courage will stand as a time capsule of where we were now to compare to where we will be. Right now, it is an important call for humans to work together to end sexism.