This year, the work of DJCAD’s animation graduates has been spread across two rooms, situated on the second floor of the Crawford 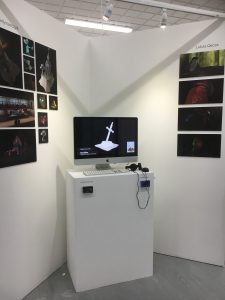 Building. In one, the students exhibit their individual work in the form of showreels, portfolios and sketchbooks. The other serves as a small cinema, playing a 20-minute loop of finished, collaborative films. In both, visitors can expect to encounter a wealth of creativity, with charming characters, vibrant visuals and wry wit.

The main exhibition room was designed by the students themselves. Apple Macs, arranged in an X-shape to encourage foot flow and avoid crowd congestion, display the students’ showreels. Each Mac is shared by two students, so careful thought has been put into which students share which computer, and what they each include in their individual demo reels to compare and contrast their ideas and talents.

Prints, sketches and stickers surround the computer displays and line the walls, transforming the white, clinical room into a colourful, stimulating space. Together with portfolios and sketchbooks laid out for visitors to peruse, they offer a further tantalising glimpse into the artists’ thoughts and processes. 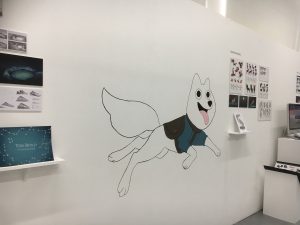 Inside the small, intimate cinema, the films playing are nothing short of spectacular. Interspersed with extremely brief solo or small group projects – such as Erinn Lucas’ Rollerdog, a piece only a few seconds long that finds its humour in high-intensity voice acting which borders on hysterical yelling – are the four main projects. All four feature completely unique, simple yet intriguing stories, told masterfully in the tight timeframe of a few minutes. ChemisTree, directed by Gosia Chlopek and Lukas Gecas, is an entirely 3-D animation filled with warm light and eerie shadows, its story putting one in mind of C.S Lewis’s The Sorcerer’s Apprentice. The students’ attention to detail shows in every crack and crevice in the bark of its two characters, who are sentient trees. On the other hand, Mark 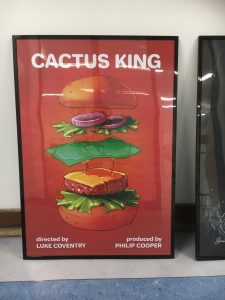 Coventry’s Cactus King cleverly mixes 2-D and 3-D animation, rendering an anthropomorphised 3-D lizard next to a 2-D man, to maximise its uncanny appearance. The story is darkly comedic, with a brilliant twist as tragic as it is hilarious. Both Cactus King and ChemisTree have no dialogue, instead relying entirely on “show, don’t tell” techniques, and allowing their characters’ expressions and the score to convey the emotion of each scene to great effect.

Targeting an audience at the opposite age range to Cactus King is Tom and Voy, directed by Michael Robson. This 2-D piece does not tell a complete story, but instead pitches a TV show for very young children. The personalities of the adventurous astronaut, Voy, and the cautious dinosaur Tom, are 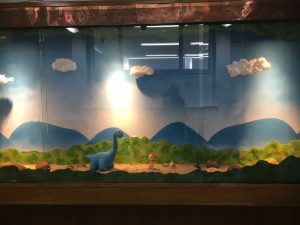 swiftly established, as are the kinds of adventures they may face, in an intro sequence and the first minute of a hypothetical episode. With its soft, bright colour palette, round-shaped characters and simple, direct dialogue, the short seems perfectly designed for its intended audience. Lastly, there is Keilidh Bradley’s utterly spellbinding Fox Fires, another blend of 2-D and 3-D animation. With its expressive animal characters, incredible score, fluid animation and a plot that could have come from folklore, Fox Fires is evocative of classic Disney animation. The short handles dialogue in an intriguing manner: the characters “speak”, but in distorted throat noises rather words, with subtitles translating. Perhaps this was to draw more attention to their body language, 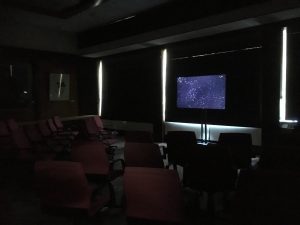 or to avoid sourcing voice actors. Yet, each voice still suits the character in pitch and tone. The embodiment of the moon especially sounds otherworldly; unnerving and regal, yet somehow gentle, thanks to the layered high and low voices with which speaks.

Overall, this year’s animation exhibition has provided a trove of beautiful and creative pieces, all set in vibrant and engaging environment. No two are alike, except in their exceptionally high quality.